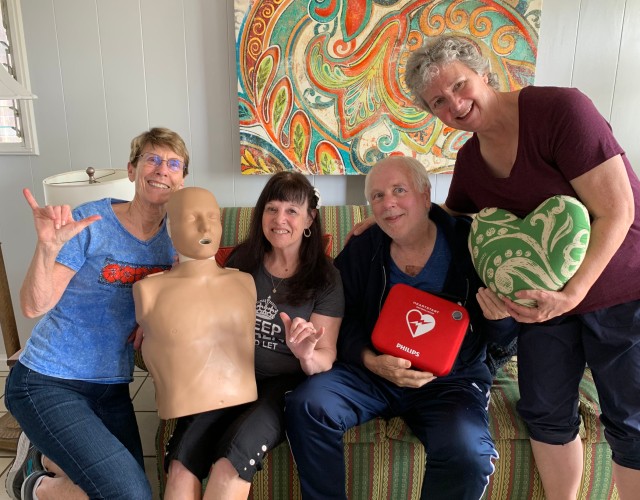 (From left), Cora, Mr. Manikin, Connie, Dick (with our new AED) and me (photo by Jenna Tanigawa)

So it turns out that if you’re performing CPR correctly on someone—high quality, fast compressions between 100 and 120 beats a minute—it helps to hum a song. One that’s been suggested for years is the Bee Gees “Stayin’ Alive.” You gotta love the irony of that.

But, according to an NPR story done in 2017 by Rebecca Hersher, there are a number of good song choices:

“In addition to Stayin’ Alive, Hanson’s MMMbop, Michael Jackson’s Man In The Mirror, Missy Elliott’s Work It, Cyndi Lauper’s Girls Just Want To Have Fun and Mariah Carey’s Heartbreaker also made the list.

“Another One Bites the Dust by Queen is one thematically interesting choice to include,” Hersher wrote.

Apparently, Spotify has a list of possible tunes called “Songs to do CPR to.” There are even more current tunes, but for some of us oldsters who were re-trained in CPR and the use of an AED, we’ll stick with the Bee Gees and Cyndi Lauper. 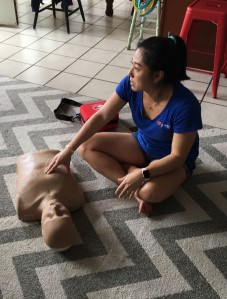 Jenna Tanigawa, project manager of the AED Institute in Honolulu, who with her boss, Pam Foster, came to visit Dick the day after his cardiac arrest in the hospital, today brought us our very own Automated External Defibrillator to take home with us. Talk about a door prize!

I learned CPR back in the dark ages of the 1970s when I was training to be a Water Safety Instructor for the city of Roseville where I eventually went to work as a lifeguard, swimming instructor and synchronized swimming coach. In those days, you also gave mouth-to-mouth resuscitation—two breaths to every ten chest compressions, as I recall. In subsequent re-trainings over the years, that’s what I practiced. Nowadays, mouth-to-mouth is out partly because, Pam Foster told me, if it collapses, the body has about 10 minutes of air. CPR is all about the compressions, keeping that heart pumping oxygen-rich blood to the brain. 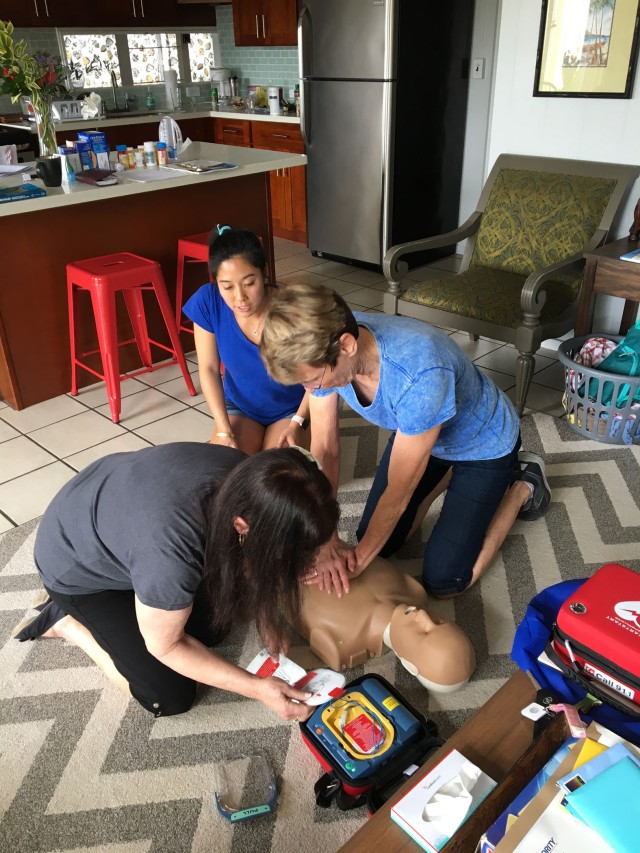 Jenna Tanigawa coaches Cora and Connie through CPR and the use of an AED.

That’s one of the things that made me realize that it’d been way too long since I’d had up-to-date CPR training.

Connie, Cora and I got that on the last day of January from Jenna, who just the day before had been training folks at the airport about AEDs. “After Dick’s cardiac arrest, there’s been a lot of interest at the airport,” Pam Foster told me on the phone.

We’re amused and rather tickled that he’s become a poster boy for AEDs and the lifesaving work they perform. But, we’ve learned, AEDs don’t actually restart stalled hearts; in fact, they stop the heart with a sudden shock, allowing it a chance to resume a regular rhythm. It doesn’t always work. It depends on the reason for the heart attack or cardiac arrest (which are different things, it turns out). Dick had the latter. His heart went into ventricular fibrillation, a kind of cardiac arrhythmia when the heart quivers instead of pumping due to disorganized electrical activity in the ventricles, according to Wikipedia. People with vFib lose consciousness, as Dick did, and have no pulse.

An AED automatically analyzes the heart rhythm of a pulseless person and, if the person is in ventricular fibrillation (VF) or ventricular tachycardia (VT), will shock the victim’s heart in an attempt to restore its rhythm to normal. AEDs will not shock patients who do not require a shock. 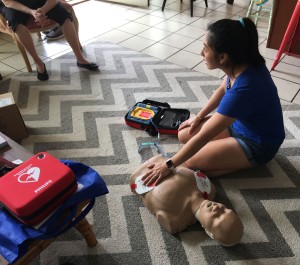 So Connie, Cora and I practiced, putting two pads—one on the upper chest, one on the belly—on the training manikin Jenna travels with. We did chest compressions and watched as Mr. Manikin’s right shoulder beamed with green lights (to signify the correct kind of compression) or red lights (not correct compression). What we three learned on the floor, as Dick watched from his spot on the sofa, is that CPR is physically demanding. It poops you out, and that’s why it’s good to have someone else to take over compressions when you need a break. We also learned that not only do the compressions need to be done in a consistent, pretty fast rhythm (stayin’ alive, stayin’ alive), but they also have to be fairly hard and deep.

“You can’t hurt the patient,” Jenna reminded us. “He’s gone.”

And one formerly gone patient one week after his bypass surgery sat there watching us, unable for the moment to join in the training. But he will when his chest heals, as his newly repaired heart grows stronger. He is now the proud owner of an AED, which he hopes never to have to use. But he will know how, and for the rest of his life, he will tell the story of how one saved him. 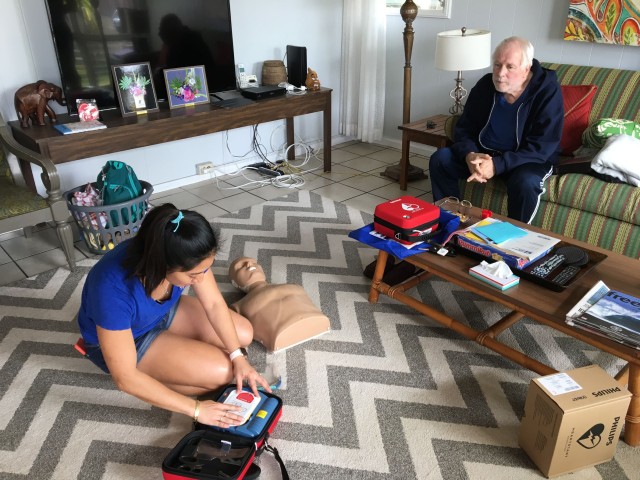 Jenna Tanigawa demonstrates the proper use of an AED as Dick Schmidt looks on.