A little shout-out to my guy, Dick Schmidt, for the fabulous work on the photo at the top of the blog. (I’m learning, in blog-ese, that this is a “header photo.”) Yes, it’s me, working on my novel at Crescent Lake, Washington, west of Port Angeles. The lake is part of the Olympic National Forest and is on the highway that leads to the little town of Forks, Wash., made famous by vampires… at least the ones in Stephanie Meyer’s Twilight books.

Dick and I have spent a fair amount of time in recent summers at Crescent Lake in cabins around the the 100-year-old lodge. The lodge is the only wi-fi’d place in this portion of the Olympic National Park, so folks go there in the evenings to check their email and so forth. I went there, often after 9 p.m., after the late diners and drinkers and checkers players had retired for the night, to write on the enclosed porch that looked out on the lake.

Crescent Lake is far enough north that it doesn’t truly get dark until after 10 p.m. in the summer, so that many nights, I’d sit on the lodge porch writing about Ocean Falls, B.C. (another place surrounded by trees, mountains and water), watching the light play on the lake, as you see in the photo.

It’s been a perfect place to work. In fact, the Crescent Lake resident flock of Canada geese inspired me to write a section in the novel about geese influencing my 17-year-old protagonist’s synchronized swimming team. 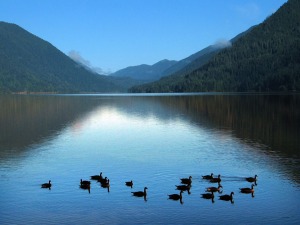 Ever watch geese paddle around? They’re as much of one mind in the water as in the air. They’ll often bob, butts up, at the same time, and pop up again as a group. They fly in a V-formation because their flapping wings create an uplift for the bird following. If a bird falls out of a V-formation, it feels drag and resistance going it alone and quickly gets back into formation. When the lead goose gets tired, it rotates back into the wing position and another goose flies point.

And I love this about geese: The ones at the back of the V honk to encourage those up front to keep up their speed. If a goose is sick or is wounded by a gunshot, two geese fall out of formation and follow the bird down to help and protect him. They stay with him until he is able to fly or until he is dead. Then they launch with another formation or catch up with the original group. 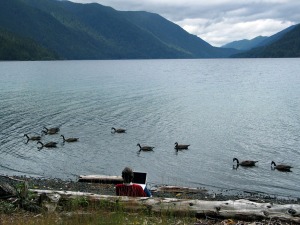 Dick is my point goose. He has supported the birth and development of this novel for six years. He goes with me on research and writing trips, shoots photos and helps with research, and falls back to rest with me when I am flagging. He believes in this novel as much—and sometimes more than—as I do.

He had to do a bit of PhotoShop manipulation of this image to get the window and lake and me in the same horizontal sliver for the header’s format, but let me assure you—it’s all real. I really was there writing and editing. It really looks like this… when it’s not raining, which is does quite a bit at Crescent Lake.

I couldn’t have a better image for myself as a writer than this one. Even from here, I see the geese on the lake, the dock jutting into the sherbet-tinged water. I feel the pen in my hand, my hand on the page. Thank you, Dickie. 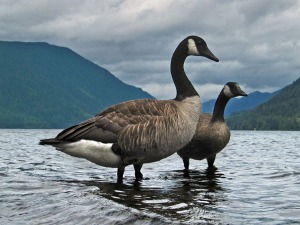 5 Responses to Ah, the photo