On our way north to Canada, Dick and I stopped in Mt. Shasta, the small town that sits 3,600 feet up the flank of the great white mountain the native people once called Uytaahkoo.

Shasta the mountain last erupted about 200 years ago, but geologists consider it “dormant,” which means it will erupt again. Every drive I’ve made north, I like to stop in that cute town and drive up to the high school, from which there’s a gorgeous view of the mountain. I look up at the second highest volcano in the United States (14,179 feet tall) and wonder if someday that town will be like Pompeii, buried under a pyroclastic flow of lava.

That sounds rather morbid, I know, but Dick and I are fascinated with volcanoes and feel lucky to live so close to such a big one. We also love going to the Big Island of Hawaii and spending time at Kilauea, which has been erupting continuously since 1983. I’m kinda nutty about rocks, big and small.

This time in Mt. Shasta, however, besides admiring the mountain (far less snowy than when I saw it in early June), we wanted to visit a spot Dick hasn’t seen in fifty years—the headwaters of the Sacramento River. In the summer of 1960, Dick’s parents and their three kids made a long driving trip to Canada to visit friends on Vancouver Island. Dick recalls his dad stopping in Mt. Shasta to show the kids the origins of California’s longest river, one of two that flowed through their hometown.

Dick remembers taking pictures of Big Springs and being told that it took fifty years for the water to work its way through the lava and come out in the Mt. Shasta City Park. He no longer has those photos, but it seemed appropriate that since we’re returning to Vancouver Island this summer to commemorate that trip and reunite with family and friends there that we also look at the place our river begins.

It took us awhile to find the park out of town to the north. When we got there, it was obvious we’d found the right place—not just because of signs that said, “Headwaters,” but because we saw at least a dozen people walking to and from them with containers for water. 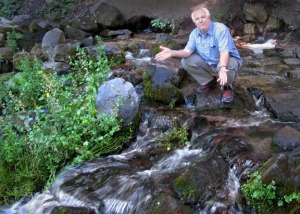 Dick at the headwaters of the Sacramento River in Mt. Shasta City.

We stood and looked at the springs gushing out of dirt—no pipes at all—making a small pond that pools and then falls into Big Springs Creek. We, too, collected some water and drank it—cool, clean, very clear. Dick took photos of what we realized is the first waterfall of the Sacramento River. And it struck me that the water we were now drinking began as snowmelt about the time the Schmidts stood on the same spot fifty years ago.

I pointed this out to Dick, and we smiled, thinking of his parents, Elizabeth and Christoffer, and their three children, wondering what they might have experienced here on a summer’s day in 1960. One of them only remembers taking pictures that day. He did that again, as a tribute to the power of a great mountain and the powerful love of a small family, both of which live on in rock and memory.