The BF on BI

I can’t believe how easy it is to make butter.

This is not a metaphor. I’m talking literal butter here, the kind you spread on good, home-baked bread, like the kind my BF makes.

A pint of cream and a serious mixer (the BF’s is a honkin’ red Kitchen-Aid). Turn on mixer. Stand back and watch liquid become butter. Stop the blade from turning like a bad carnival ride. Spatula the sides of the metal bowl. At some point, the butter begins to leak (what else?) buttermilk. That’s how you know it’s done.

This is what I learned from my BF this week at her new home on Bainbridge Island, Washington, known locally as BI: Butter is a breeze. And the sun shines every day on BI.

I believe the first one because I saw it. But as for the second… I know the Pacific Northwest. The sun, most emphatically, does not shine every day. Well, maybe it does behind the clouds. But the BF loves the clouds and the mist; this is her kind of weather. Which comes from spending too much time in Wales, I think. Or San Francisco. Or Pacific Grove. All places she called home for a time.

But the BF, husband Ron and daughter Emma have forsaken Sacramento, her hometown and now mine, for BI. And who can blame them? Sacramento in the summer can fry you. Her new place, dripping with pines and so much green you can taste it, suits her, as she likes to say, down to the ground. She is beyond happy. I have rarely seen her so happy. And she deserves this.

I mean, check out this house. 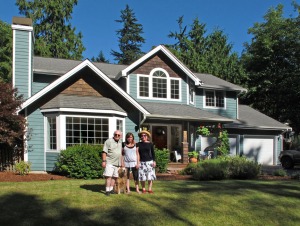 Ron, Emma and Georgann Turner at their new home on Bainbridge Island, Washington

It’s a cute-as-spit two-story with a front porch at the end of a cul de sac that runs into forest on two sides. Deer emerge from the greenery across the street and disappear into it like the baseball players in “Field of Dreams.” It’s beautifully furnished (Ikea rocks!) and, though they’ve been there a little over a month, the house feels cozy and settled, as if they’ve been islanders for years.

It helps that they rented it from people who have decamped to Norway for a year or two and left them with some furnishings and a nicely tended yard. But still, there are BF touches all over the place–notably the red accent pieces in the black and white kitchen. “It’s a newspaper!” I said.

“Black and white and red all over?” she said, peering into the mixing bowl as butter was being made.

Georgann, Ron and Emma spent two afternoons touring Dick and me around their new island: to their local public beach, which is about forty feet long (homeowners with beachfront property apparently have possession of the beach, too). To the harbour (Canadian spelling on the sign because they’re so close, I guess) to watch the ferry dock through a sea of masts. To Bay and Hay Feed, which is also a nursery and cafe, clothing store and lunch spot–not to mention an actual feed store. To Eagle Harbor Book Co., where I redeemed my birthday gift certificate for books by local authors. To the local museum, which currently has an exhibit of Ansel Adams’s photos of Manzanar, a WWII internment camp (some 227 Bainbridge Islanders were interned there). 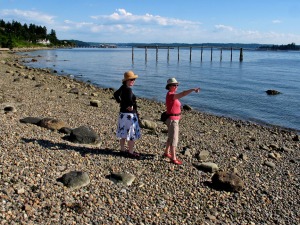 And at the end of the second afternoon, after lunch at Cafe Nola and picking up groceries at Town and Country, we headed home to practice Skype-ing (a new thing for me) and start dinner. The butter-making came first.

After it becomes butter in the mixer, it begins to separate. “Into what?” I said.

“Butter and buttermilk,” said the BF.

“Wait. It starts as cream, then becomes butter, then goes back to liquid?” My mind boggled. Chemistry in action.

“Yep,” said the BF, stopping the mixer to show me. Sure enough, a milky liquid in the bottom of the bowl. “We save this and make biscuits with it.”

Labeling the buttermilk next to the brand new butter.

She scooped the butter out of the bowl and mashed it around like Play-Doh, rinsing it under running water, squeezing it, then rinsing it again. Then she plopped it in a small bowl, poured the buttermilk into a lidded jar and labeled it.

“That’s it? Butter?” I said. “No salt? Nothing else?” I tried to imagine our foremothers with a churn, turning and turning all that cream. It must have taken forever. They must have had forearms and biceps like pitchers.

And it was. Simple. Clean. Easy. More things in life should be that way. Perfect on her homemade bread, which Ron offered to Dick as a pre-dinner snack. He smacked his lips in appreciation. And we inhaled the pasta carbonara the BF made later, too–more cream and onions and bacon over linguine. Good salad. The exquisitely simple bread and butter.

So I am happy to see the BF so happy. It made me forget for a while that she has moved two states away to begin a new life. It helped me forget the year and a half she spent so sick, recovering sllllloooooowwwwwly from cancer surgery. It reminded me again of how lucky she is to have this second chance–or maybe fifth or tenth, she says–to start over in a new place that suits her down to the (very wet) ground.

I had feared that an era had ended. But, as she has assured me, our friendship will not end. 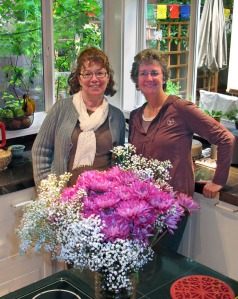 The BFFs on BI

It began twenty-three years ago writing letters when she attended college in Wales. Now, instead of aero-grams, we will email and Skype. It will take on a new form, like turning cream into butter.

The sun may not shine every day on BI. But the BF is shining on her path to wellness. She is the sunflower lifting its head to the light, the bird tweeting a song from the depths of its grateful heart. And that makes me very, very happy, too.

3 Responses to The BF on BI