Part of the Kowloon peninsula from one of the guest bedrooms at the Macphersons’.

So after Nikki made the statement that Hong Kong is emphatically NOT China, I got to see a bit of Hong Kong… for less than 24 hours, but we’d be back at the end of the trip. That bit of a day was enough to make me think, “Ahhhhhh… Hong Kong.” Because although I had nothing Chinese to compare it to (yet), HK (as the locals call it) clearly is a cosmopolitan city with many tall buildings and much to see and do among its small islands and part of the mainland.

But it is NOT China, as the Hong Kong-ians (?) will tell you. (I just looked up the right term—it’s Hong Kongers or Hong Kongese.) Having been a British territory for 156 years, Hong Kongers drive on the left side of the road, which makes it tricky for a Yank like me when crossing the street. This is not a problem for Anne and John Macpherson, Nikki’s friends who so graciously hosted us at the beginning and end of our trip at their cozy and lovely apartment on the Kowloon Peninsula. They’re from New Zealand, where they also drive on the left.

But Anne and John don’t drive in HK for the same reason many people don’t—it’s expensive to keep and park a car, and the public transport is so good, no one has to drive. So the next thing I learned about HK is that you can get anywhere you want to go via the MTR (Mass Transit Railway), which carries 1.6 billion passengers a year, according to a 2015 CNN story. It runs about 20 hours a day over 218 kilometers and carries more than 5 million passengers daily.

Riding the MTR in Hong Kong

Including us—from Airport Island (where the planes land and take off) to Kowloon, via above-ground and underground trains. And, according to Robert Cervero, a UC Berkeley professor of city and regional planning quoted by CNN, “Hong Kong’s MTR is one of the best designed, best operated and most successful metro systems in the world.”

I didn’t read this quote until I returned to Sacramento (a city not known for its mass transit system), but I was even more impressed. Apparently the MTR has a 99% on-time record, too. And it costs an average of $1 per trip, which you pay for using the Octopus card. You buy a card and  put  money on it, then place your card on a reader to enter a station. It’s so fast and convenient—and you can use the Octopus card at stores and restaurants, too, to buy food or bottled water or whatever you want.

So right there, Hong Kong gets my vote for Most Efficient Way to Move Loads of People and Buy Stuff.

We changed our American money to Hong Kong dollars, bought bottles of water (we are to consume nothing but bottled or boiled water on this trip). We got to John and Anne’s new place, a series of very tall highrises called Liberté, after 9 p.m. HK time after a long day of travel that was really two days because we lost one going ahead in time—15 hours ahead in time. But that was OK, Nikki told me, because we would get the day back on the way home. Nikki used to work in Anne and John’s neighborhood, and I was dazzled that although she hadn’t been there in four years, she could still find her way around with only minor hesitation and much sign-reading.

(Have I mentioned that Nikki is impressive for many reasons? This is just one of them.)

Anne and John Macpherson are friends of Nikki’s from a HK church they all attended called The Vine, where John worked for many years with refugees and asylum-seekers. Anne came to HK to teach and now coordinates English language programs at several schools. They’ve been in HK for 13-and-a-half years and love it, though they do miss their home and grown children in New Zealand. One of those children, Cat, is currently hiking the Appalachian Trail in the U.S., and the Macphersons have a map of the trail on the side of a bookcase, marking Cat’s path as she walks.

The Macphersons’ light and lovely living room in Kowloon.

Even though their apartment is tiny by American standards, it has three bedrooms, and the Macphersons graciously loaned Nikki and me each one of them. They are each no much bigger than a compartment on a train, big enough for a twin bed, a small desk and cupboard (closet). The bathroom is just big enough for the tub/shower, a potty and a small sink/counter area. The kitchen is a small square off the long rectangle of a main room. It’s all very efficient and tidy with astonishing views of the city and the mountains beyond.

Anne asked if we were hungry, and though Nikki demurred, I was starving. So John whipped us up some scrambled eggs and tomatoes with yummy bacon, which was for me the best late dinner ever. Then we could go to bed and sleep, finally, which we hadn’t been able to do on the plane. Nikki wanted to leave for the train station by about 1 p.m. the next day, a Sunday. 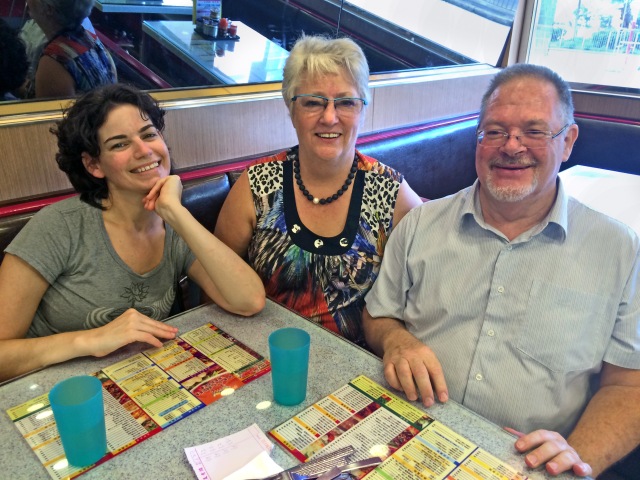 That gave us time for a good visit in the morning with Anne and John and a walk in the bright sun and (I thought) terrific humidity to one of Nikki’s favorite little restaurants where we had more eggs and bacon. A nice waitress who spoke only Chinese talked with Nikki, who ordered for all of us—it turns out that Nikki has a great deal of experience with Mandarin, which proved to be a huge advantage throughout the trip. But the challenge is that many people in HK speak Cantonese, which Nikki doesn’t know. So figuring out eggs and coffee and tea was a bit of a challenge, though it all worked out just fine.

It was good that we ate well since we had to gather up our luggage and make our way through HK on the MTR, then transfer to a train that would take us to the Chinese border. We would walk through customs (out of HK, into China) and through a covered walkway across the Shenzhen River to get into China’s fifth largest city of Shenzhen in Guangdong province (formerly known as Canton). From there we would take the train to Changsha in Hunan, pick up Annie, then return to Guangdong’s main city of Guangzhou to complete Annie’s U.S. paperwork.

So we bid Anne and John a fond farewell (aloha!), knowing that when we returned to their apartment in less than two weeks, we’d have Annie in tow. They wished us well, safe travels and good luck along with their hugs.

“Let’s go get your daughter,” I said to Nikki as we made our way back to the MTR to begin the journey north.