Best way to eat a banana with a spoon: out of its own cup! Annie and Nikki in Guangzhou.

Wherever you go, go with all your heart.
—Confucius (whose real name was Kong Qui)

More than 30 embassies and consulates from all over the world have offices in Guangzhou, according to Wikipedia, many of them in the Tiahne district, and the U.S. consulate is the only one of five U.S. consulates in China that processes adoption visas. So all Americans adopting a Chinese child come through this city. Including us. 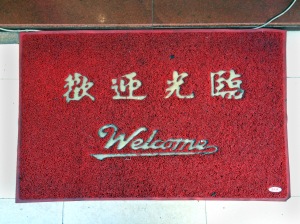 Guangzhou (population about 13 million, the third-largest city in China) has a history that dates back about 2,200 years (also from Wikipedia, which I consider a not-bad source, especially if you consult the footnotes at the ends of entries that lead you to better sources). So we arrived deep into the night in Guangzhou (pronounced Gwan-jo), the capital of Guangdong (formerly called Canton) province, south of Hunan province (where we were in Changsha) and just north of Hong Kong, where we began and will end our trip.

Got that? Not to worry if you don’t. Here’s the important thing:

Because this is embassy/consulate territory and many high rises sprout into the sky like long-stemmed silver weeds, this neighborhood feels more prosperous, more upscale than anything we saw in Changsha. Many Westerners live in the Tiahne district, including, once upon a time, Nikki.

Our hotel, the Guo Men, is an older hotel, but very classy. It has Chinese-style beds, which is to say plywood “mattresses” with a whisper of fabric on them. I have built an impromptu platform of pillows to sleep on—by no means soft but more tolerable for this wimpy American. (Nikki and Annie are much more hardy and sleep just fine on their hard surface.) The hotel sits across the street from a McDonald’s and three coffee houses, one of which is a Starbuck’s. (In contrast, we saw no Starbuck’s in Changsha.) This area is, for the most part, more wheelchair-friendly, except for the ten sweeping steps up to the hotel. There is no ramp that we can find, so we lift Annie’s wheelchair up and down every time we come or go, though if one of the nice, young doormen is on duty, he will usually help us. (Unexpected bonus: I am losing a few pounds and building up some serious arm muscles.) 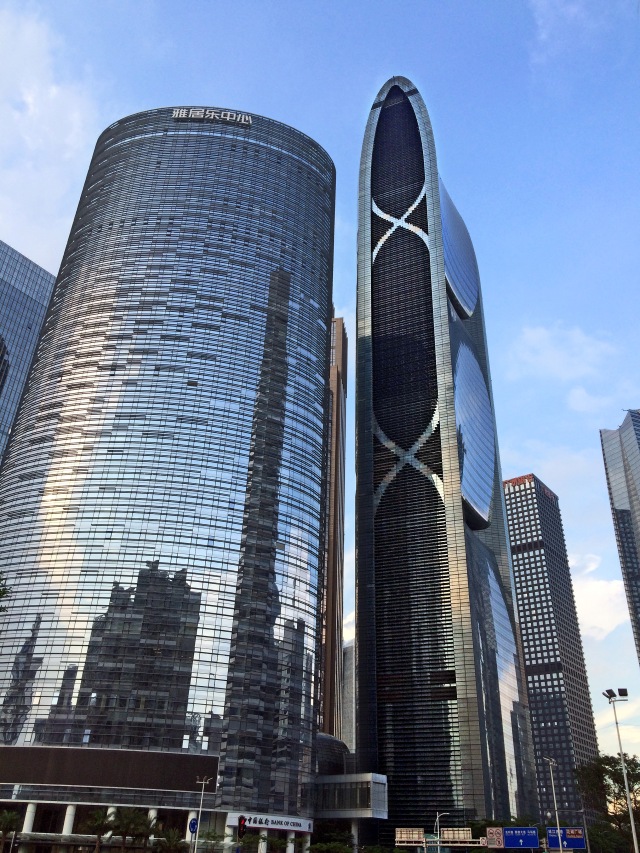 Mind-bending architecture in Guangzhou… why?? how?? 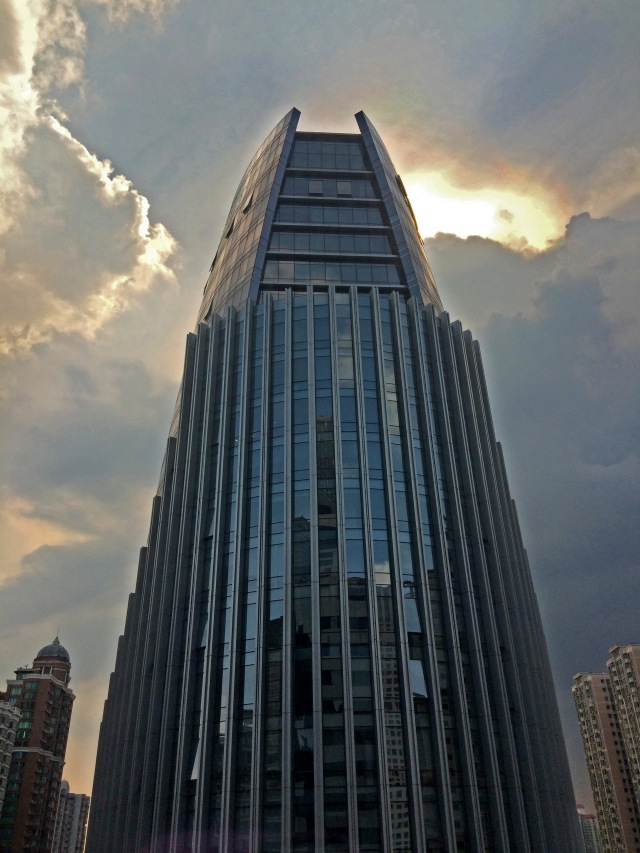 The view from our hotel window… I think of it as the Batman building.

And, as in Changsha, the sky is surprisingly blue here, too, on the edge of the Pearl River Delta, one of the largest in China. It’s still beastly hot and humid in this monsoon season—the breeze does not cool you; it just teases you with what might be—but we are clearly no longer in Kansas. This is a little more like Oz, actually. There really are yellow brick sidewalks in places.

Yellow (and red) brick sidewalks in the Tiahne district of Guangzhou.

If Changsha was the place to pick up Annie and complete the Chinese paperwork, we are in Guangzhou to do the American business that will let Nikki bring her home as a U.S. citizen. In both cities we’ve had translators. In Changsha we had the services of the very capable Wendy; in Guangzhou Elsie does the honors. (I love that these Chinese women have taken on American names for their work, which I bet no one in their families calls them at home.) We could not do what we need to do without them, and we are most grateful for their assistance. 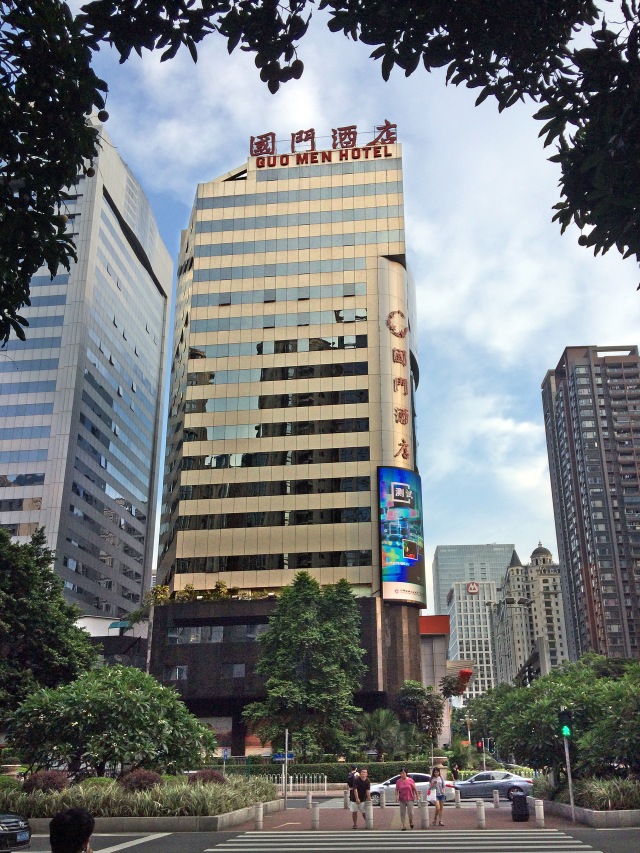 Our hotel, the Guo Men.

We also continue to use what we’ve learned from others on this trip. For example, I had no idea that you could eat a banana in its own jacket with a spoon (see photo at the top of this post). Nikki calls this the ayis’ banana hack, the way the Chinese carers fed kids bananas in the orphanage. You cut a banana in half and use a spoon to moosh up the ’nana and then feed it to the kid. You have two halves, so you can save one, if you want. Is that genius, or what?

I mean, really… 2,000-plus years. This boggles my mind. In California we’ve got white people history back about 160 years, though native people can certainly claim a couple of millennia, too. We, unfortunately, don’t have museums, though, that cover that span of time or those people. In China, they do. The Zhenhai Tower at the Guangzhou Museum dates back to 1380 (that’s a year, not a time, though they do keep 24-hour time in China). I love telling my students that although Johannes Gutenberg invented a printing press with movable type about 1440, the Chinese were doing the same thing a couple of centuries before that. (Gutenberg was no slouch—he figured out a formula for high-quality printing with metal type and oil-based ink. Not to take anything away from the man: He was the guru of movable type… in Europe.)

The Chinese were printing with movable type centuries before Gutenberg. 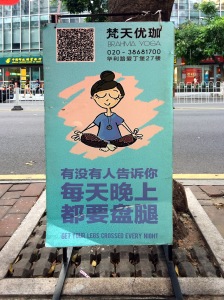 But the Chinese got there first. China likes to be known for the four great inventions: papermaking, the compass, gunpowder and printing. But (hello!) the Chinese also figured out how to make beer, mechanical clocks, porcelain, and how to harvest silk for paper and cloth, to name a bunch. Not to mention how to spoon-feed a kid a banana out of its own jacket.

So anyone who thinks this place is not civilized needs to look again. These folks invented civilization long before most other civilizations. Don’t get me wrong: China has made me even more appreciative of my privilege and good fortune to be from the United States (not that I wasn’t before). But the people (who speak Cantonese, by the way, not Mandarin, as they do where Annie comes from) are what will stay with me.

Look at these men on a construction crew, for example. Some of their ancestors may have immigrated to California in the 1850s to build the Central Pacific Railroad through the Sierra Nevada. San Francisco’s Chinatown (the oldest in North America, established in the 1840s) has the highest per-capita concentration of Chinese Americans of any city in the U.S., many of them from Guangdong province or Hong Kong. Some of Annie’s people and their descendants live very close to her in Sacramento! 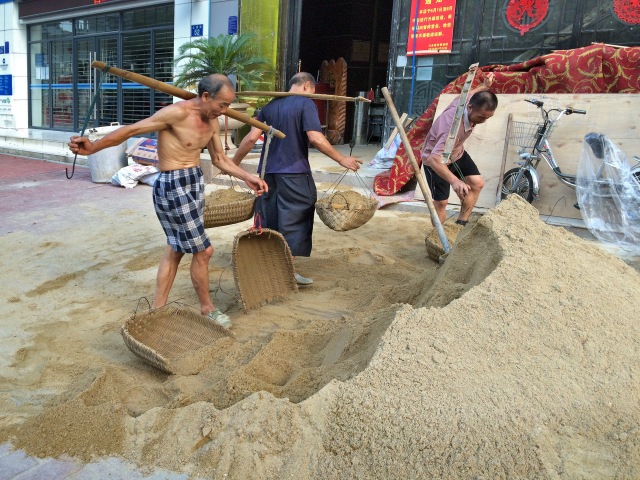 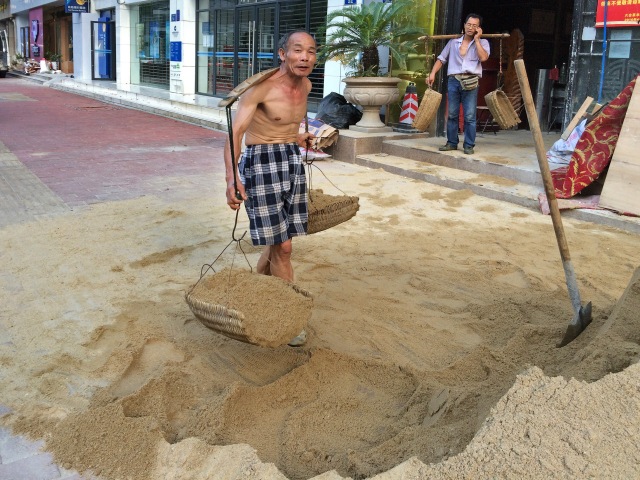 Guangzhou old and new: from the traditional laborer (foreground) to the modern, cell phone-carrying kind (rear).

This is what I’m going to tell Annie someday when I show her these photos in her next photo album, the ones Aunt Jan will assemble for her from this journey.

“These are the people you come from,” I will say. “You come from Lucy and the ayis and your friends at The Lighthouse and The Butterfly House. But you are also from strong women fluent in two difficult languages like Wendy and Elsie who work as interpreters for people adopting children. And see these men shoveling sand into bamboo baskets, then attaching them to carrying poles or yokes and taking them in a building for construction? The shirtless man had to be 70 or more, lithe and strong and working so very hard on a hot summer day.

“You are from the noodlemakers and the fruit sellers, the doughnut man and the women who clean hotel rooms, the doorman, the yoga teachers and yogis, the women working at the newsstand, the business people and educators and the young people who work at McDonald’s.”

I will tell her how much I learned during my brief time in China, as I know her new mama will tell about her many years of experience in Annie’s home country. And I will say:

“These are your good people, people to be proud of, as we are proud of you.”