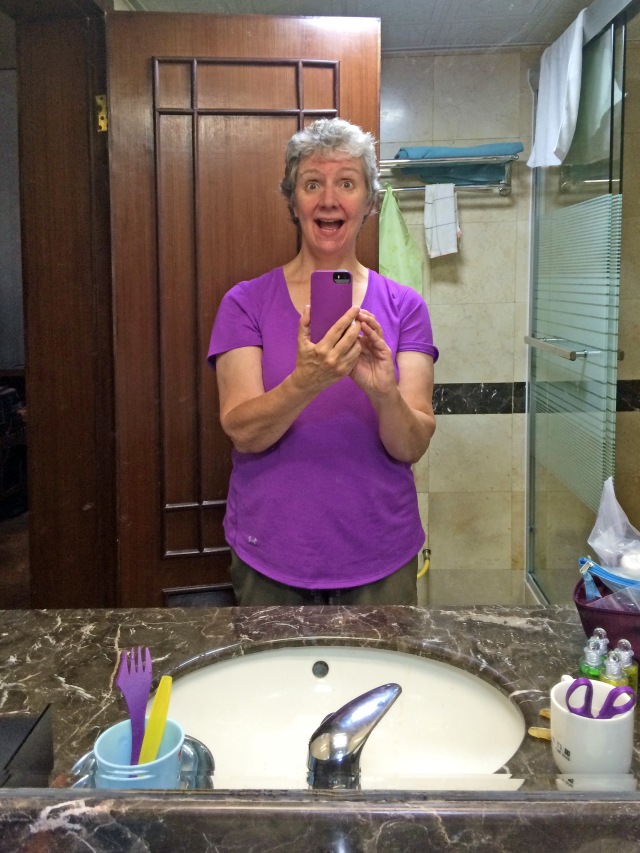 Me: pre-hair wash… aka, my usual hair.

So in China, besides going for a foot massage, which is more like a mostly clothed, all-over massage that leaves you like (pardon the cliché, but it’s so true here) a wet noodle, Nikki says a hair wash will change your life. Or at least make you feel better. It’s an inexpensive way to restoreth the soul, allowing you to emerge with clean hair, a well-massaged head, neck and shoulders, and blow-dried hair that makes you look like an entirely new person.

So on our final afternoon in Guangzhou, Nikki and I took turns going for a hair wash so one of us could stay with Annie.

Nikki and various female friends living and working in China used to get themselves a good hair wash on a regular basis. It feels good and doesn’t cost a lot, so why not? Yet every time Nikki has had this done, she says the stylist, who is always an incredibly thin young man, comes at her with a round brush and a blow dryer, determined to straighten her lovely curly hair. I, too, have curly hair and, after years of fighting it, I’ve embraced it. In fact, on this trip, I’ve been washing my hair and then letting it air dry, finger combing the curls as they pop up. I have to say that I think it’s kinda cute.

So I was curious to see what a thin, young male stylist would do to my hair. The hair wash that used to cost Nikki and her friends 15 RMB (about $2 U.S.) is now 35 RMB, which is about $5 U.S.—in Guangzhou anyway. I thought it was a bargain for a very nice head, neck and shoulder massage, let alone the shampoo and blow dry. 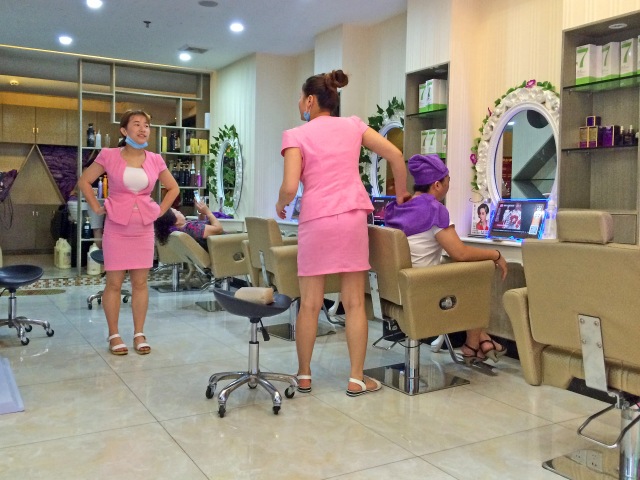 The hair washers in pink.

But, oh, what a hierarchy in the salon. The hair washers are all young women who, at this place, wore short pink skirts and short-sleeved jackets over white or black camisoles. One could not miss the fact that these young Chinese women had bigger chests than mine. Nikki had earlier pointed out to me while walking past a “palace of beauty” that Guangzhou is the plastic surgery capital of southern China, and that it’s considered essential for young women to have (to quote the wild and crazy guys of the late 1970s “Saturday Night Live” skits) big, American breasts. Clearly, every hair washer in the place had had her augmentation. I wondered if that was a requirement for employment.

But boy, do these young women know their stuff. They 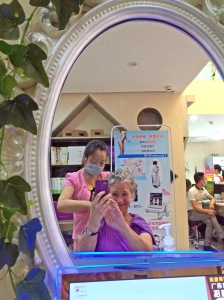 have fingers of steel and, since I was alone and no one spoke English, I could not figure out how to say, “Lighten up, wouldja?” The woman thumbing and digging into my skull would occasionally say, “OK?” and because I didn’t know how to say “gentler” and I’d forgotten how to say “no”—and I only knew those words in Mandarin and they speak Cantonese in Guangzhou—I just said “OK.” My head kind of ached in a good way when she stopped, though, and the sore spots I hadn’t known were there until she mashed them were not as sore. Maybe, I thought, there’s something to this tough-love massage, which I am not used to.

Then she took me to sit in a chair before a mirror for the head massage and the comb out (raking the head with a wooden comb—rather nice, that part). That took a good 20 minutes. And then he came to stand behind me, looking down at my head (perhaps taking in my graying strands) with a funny look on his face. This young male stylist (photo below) was not as flashy as one of the other young men in the salon, obviously a Stylist of Note in his bright yellow pants and turquoise tennis shoes whose hair hung down one side of his face in an asymmetrical way (it’s a look). But he took to my head with a small round brush and a blow dryer with an intense look on his face rather like a concert pianist. He was going to Tame That Hair.

And he did, though it took him about 20 minutes, pulling on the hair to straighten it as he dried it, layering the top with a side part like some of the guys at my high school wore in the 1970s. In fact, by the time he was done, I could have passed for one of those guys. I blinked at myself in the mirror, amused. I flashed him a grin, took photos as he worked and afterward, which did not make him smile. When he was finished, he all but dropped the brush as if it were a microphone and stalked away like Mick Jagger onstage.

This was the result:

I think the boyish look is funny for an about-to-be 58-year-old woman. Nikki had come back with her curly tresses tamed, too, and joked that because of the humidity they’d be back to curly before she went to bed. I was hoping mine would, too, because, as I said, I’ve embraced my naturally curly hair of many shades (nearly 50 of them gray). I didn’t want to dis the stylist’s work, but I couldn’t wait till morning when I’d shower myself into my usual look.

The head massage, though? For the first time on our trip, I slept like a log that night, even on the hard Chinese bed atop my little pillow padding, my scalp tension-free at last.

That young woman in pink with the enhanced gazongas who spoke only Cantonese did me a huge favor. Though I thanked her at the time in the best way I knew how—with a smile and a “shay-shay,” the Mandarin pronunciation of “thank you”—I wish I’d have been able to go back and given her a hug. My head with its boyish hairstyle felt lighter than it had since we began this trip. And, I have to say that for once, I did not mind thinking of myself as an airhead.