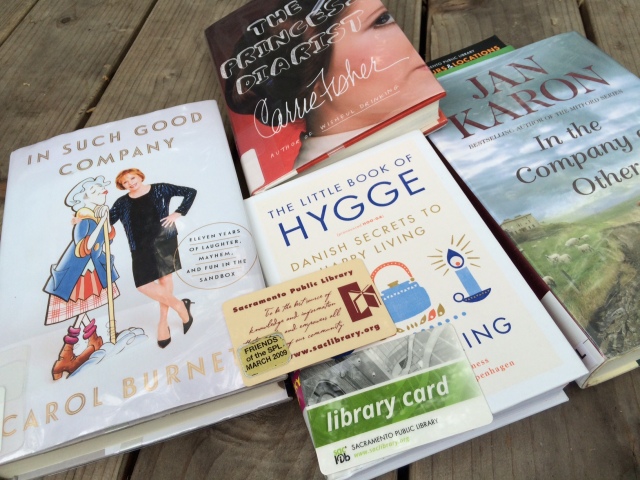 I remember my first library card in its little slipcover, my name emblazoned on it, typed by a manual typewriter: Janis Linn Haag.

Did Mrs. Nelson, the children’s librarian at the Roseville Public Library, type it? I don’t know; I just know that that little buff-colored card gave me access to the world, long before bigger libraries and long before something called the Internet. And my mother, a voracious reader who inhaled books like oxygen, passed along her reading genes to me. So it was she who took my younger sister and me weekly to the old Carnegie library, traveling the 8ish miles from our house on the edge of Folsom Lake State Park. Once there, we’d head into the library basement, Mrs. Nelson’s lair of wonder — at least to me.

I’m thinking about that library, now the Carnegie Museum (www.rosevillehistorical.org/) of the Roseville Historical Society. In the 1980s the building was supposed to be demolished (you can read the story on the website) and the land turned into a parking lot. But a descendant of the McRae family, who had donated the land with the intention of it always being a home to a library, declared that she would expect that the site be returned to her.

“The original deed was verified and the old building was saved,” the historical society’s website says. “But it needed restoration and a purpose. The good citizens of Roseville banded together and formed ‘The Roseville Historical Society’ with the purpose of preserving and protecting the history of Roseville. Together with the city, funds were raised for restoration and the venerable old building was once again a library but with the new focus of educating people about the history of Roseville. In effect, it became the ‘Carnegie Library Museum.’”

So, as I’m making a list of things I want to do during the rest of 2017 — now that I’m about to start a semester’s leave from teaching — the Carnegie Library Museum in Roseville is now on it. (Mom! Field trip!) Another thing on my list I did today: I picked up my new library card from my local branch of the Sacramento Public Library. And! I checked out my first library books in decades.

I still love books, gulp them like water, really. But as I’ve grown older and had my own money, I buy them. And buy them and buy them, as anyone who has seen my house can tell you. I’m awash in books. I give many away each year, typically to the Sacramento Friends of the Library for book sales. But I’m still up to my armpits in volumes and paper in general in my house. One of the things on the While Jan Isn’t Teaching list is to continue to sort through, donate, throw out unneeded paper and things made of paper.

My friend Christine loooooves the library and regularly orders books she wants online, then picks them up, devours them, and returns them. I decided some time ago that I want to follow her example. So I went online a couple of weeks ago and ordered a new library card since my old one (you can see it in the photo) no longer works. There’s a whole new system, as there should be in these modern times. Library cards are still free, though there’s not a Mrs. Nelson at an upright Royal typing your name on it. My name is nowhere on this new card—there’s just a long number and strip on the back that links to information about me in the computer system. But oh, what you can do with it! So much more than in the old days.

I had a sweet moment this afternoon picking up my card from the Clunie Library in McKinley Park, which is about as close as I’ll get to my old Roseville Library. Both buildings are venerable elders. The Clunie Clubhouse, which contains the library, opened in 1936; the Carnegie library in Roseville was built in 1912. Clunie still has its original walnut paneling and Stickley furnishings. My library houses exhibits, and I’m eager to see them and the building. Both libraries are well cared for and beloved in their communities.

I strolled through the small main reading room at Clunie today, drinking in the books on the shelves, noticing people at computers, a few children in the kids’ section, someone on a chair upstairs in the loft area where rows of books run east/west and the late afternoon light streamed in through a high window. I wasn’t planning to check out books, but light reading beckoned. Carol Burnett’s memoir leapt off a shelf into my hands, as did Carrie Fisher’s. And though I haven’t read any Jan Karon books about Father Kavanagh in Mitford in years, I thought of my late friend, Julie, who loved those books. One found its way onto a growing stack in my arms.

And just like that, I was back in the Roseville Library with my mother, selecting books to borrow, books that had to be read with clean hands and returned in two weeks (now you get to keep them three weeks, and you can renew them online, if no one else wants them!). A nice young man made my new card right there and grinned when I came back to him later with books to check out. He slid my new card through a reader and pointed one of those laser guns at each book’s spine. “Welcome to your library,” he said, making me grin even more as I thanked him.

I walked across McKinley Park to my car, books in arms, smiling, remembering that feeling of “Ooooo! New books!” as if I didn’t order them online or buy them from independent bookstores… both of which I regularly do.

When I was a child, Mrs. Nelson pointed the way to authors she thought I might like, encouraged me to read biographies, even the adult ones upstairs. No one ever restricted my access to books (thank you, grownups!) or questioned what I read. And those grownups fostered a reader who became a writer and a teacher, who still drinks thirstily from the pages of books, who has written a few of her own, who continues to revere books and writers.

And as I slipped my new library card into my wallet, I thought, Let this be the beginning of a beautiful relationship with the library I have supported with donations of books and money for years. Let this become a well-used card. Let me bring home library books as temporary housemates. Let the stories become longtime friends.

Thank you, Mrs. Nelson and all the librarians and library staff, including the young man today, who have helped me over the years in libraries and archives. Thank you, Mom, for all the trips to the library. I’m baaaaack!