Last year I spent the fourth of July sleeping most of the day and night. I’m not a fireworks kind of girl—never have been. I’m like one of the dogs who scurries for cover when the loud boom-booms start. Firecrackers make me flinch, and my heart rate increases. They always sound like gunshots to me. So do balloons popping within 10 feet of me.

I’m not sure why. And no matter how much I try to talk myself out of it (c’mon, Janis, you’re gonna be 59 at the end of the month—you’re a grownup and a half, for heaven’s sake), when those sharp sounds erupt around me, my internal sensors still prompt a flinch and a jump.

So I’m fine missing the fireworks—though I do love watching grand showers of fiery cascades overhead… with silicone plugs stuffed in my ears and feeling the great booms in my chest.

Last July 4 I’d just returned from a 16-day trip to southern China by way of Hong Kong, traveling with my friend Nikki as she adopted Annie from an orphanage in Changsha, Hunan province. It was, to put it mildly, challenging on nearly every level, as readers of this blog will note. (If you’d like to read the accounts of that trip, click on “Bringing Annie Home” in the bar across the top. Scroll to the bottom and read up—the entries are in reverse chronological order.)

Annie, who has cerebral palsy, gets around in a wheelchair pushed by (on this trip) mostly Nikki and sometimes me. Annie, who was about 7 last year (precise birthdates of kids in orphanages are rarely known), needs help with everything: feeding, bathing, dressing. Though she can now use a toilet with the proper apparatus to support her, last year found Nikki and me changing the leggy, grinning girl’s diapers many times a day. Feeding her was a full body workout for everyone involved since her palsy (which has since lessened) caused Annie to waggle her head almost constantly, making it hard to get a spoonful of food in her mouth.

And it was hot. “China hot,” as Nikki said, which meant about 90 degrees and 90% humidity. That’s not an exaggeration. Rarely a breeze outside. Air conditioning that varied from so-so to freezing, depending on where we were indoors. We all lost weight, which didn’t help Annie, who was already thin, though Aunt Jan was pleased to come home a bit lighter.

One day when we were in our second Chinese city, Guangzhou, I took Annie for a walk. Nikki and our translator were hightailing it all over town looking for medication for Annie, some of which had come with Annie, though not enough to get her home. “Why don’t you two go for a walk?” Nikki suggested. Never having been to Guangzhou and not speaking Cantonese, I figured I’d explore the area around our hotel, which was, I was told, close to the U.S. Embassy where Nikki and Annie would make an appearance to do the final paperwork to bring this adopted child to her new country.

Guangzhou is a huge, cosmopolitan city of more than 13 million people, the capital of Guangdong province on the Pearl River about 75 miles north of Hong Kong. That Sunday blazes in my mind—early morning blue sky and fluffy sheep-like clouds looking so pretty despite the breathless heat; walking by the deserted government building where Annie would have her physical the next day; gawking at the oddly shaped opera house I later learned is called the Double Pebble, though I thought it resembled a spaceship; the Canton TV Tower that looks like a giant metal sculpted hourglass. Eye-popping architecture soared into the sky around us.

And then, continuing our sticky stroll, we walked by the nondescript concrete building behind a tall fence of black slatted steel where in one window someone had pasted a rainbow flag. It was June, Pride month. We walked a bit farther to see the U.S. flag hanging limply on its pole, and I knew this had to be the embassy. And then I saw the words one the side of the building:

We had spent almost two weeks at that point in our journey slogging through heat and crowded cities, on trains and in horrendously hot train stations, and Nikki was learning to be a mom to Annie, who was amazingly good-natured about two strange white ladies taking her off to who-only-knew-where. We were exhausted, to say the least, and I touched the tummy pack I wore everywhere with my U.S. passport tucked safely inside, and I stopped for a moment under a tree to look at this bit of home.

I felt an upwelling of emotion, something I am not normally prone to when I see our flag. But this was certainly a fortnight when I was very aware of how far I was from home and how lucky I am to be a rich American compared to so many Chinese… and other Americans, for that matter. We had seen so many people in China living in dire poverty, so many children with disabilities who would never leave the orphanages or welfare centers where they would be housed as long as they lived. Nikki was changing the life of one of those children forever, but there were so many more… thousands more. 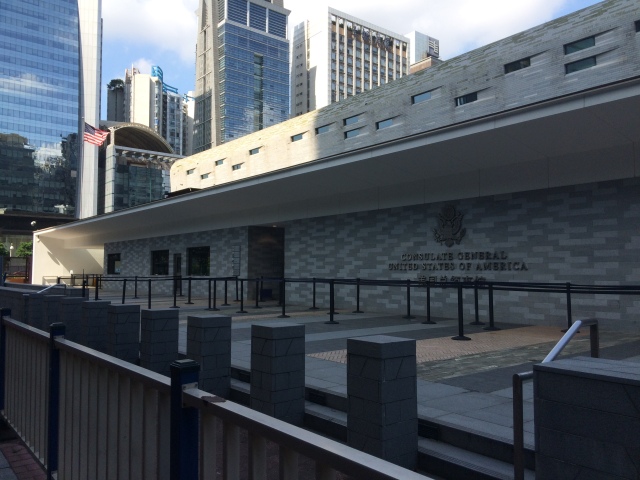 Consulate General of the United States of America, Guangzhou, China

I stood there, tears spilling down my cheeks, and thought about how I was raised by people who always took it for granted that I would go to school, including college, pursue a career that made me happy and make my way in the world as an independent, free-thinking woman, no matter whether I decided to marry or have children or not. I thought of all the opportunities and privileges I’ve had (which not everyone gets) as a white, middle class, well-educated American professional woman. Overcome with homesickness and gratitude all at once, I looked down at the little Chinese girl in her wheelchair and said, “That’s the flag of my people, of my country, the United States of America. It will be your new country, too.”

And Annie, who is nothing if not a good listener, may have been perplexed about why Auntie Jan was crying as we looked through the fence at that building that probably didn’t look all that important. But it was to me, and Annie, who had few words, grinned her great grin at me, and I resumed our walk.

We circled back to the Embassy about a half hour later on our way back to our hotel, and that’s when I pulled out my iPhone (made in China; engineered in California) and took the photo that begins this post. The breeze had come up, just a tiny bit, and lifted Old Glory enough so we could see its stars and stripes. That made me tear up and smile again, so I began telling Annie about founding fathers and 1776 and Betsy Ross and 13 colonies and colonial publishers of newspapers (including some women) who risked treason as they advocated independence from England. (I teach mass media history; this stuff is embedded in my cells.)

And when I looked down at this girl in her chair, this is what I saw:

I grinned then, knowing this would not be the last time she falls asleep while some grownup is nattering on.

I hope Annie will always retain her Chinese roots and learn about the country where she was born, about the amazing culture and civilization she comes from. But I also know that she will grow up as an American, that in her first year in the United States she has already had opportunities and education she could not have had in her homeland.

Six days later Miss Annie took her first airplane ride on a big ol’ jet airliner back to San Francisco, following a similar route (though, of course, they came by boat) that many Chinese from Canton (the city now called Guangzhou) took during the Gold Rush years in California. They, too, immigrated in hopes of a finding a better life and more opportunity for their children. And though they faced incredible discrimination and horrible living conditions, many of those Chinese men built, among other things, a railroad that linked the western U.S. to the east. I learned that many of my Chinese American friends’ ancestors decades earlier came from this same province once known as Canton where they and Annie leaped the last hurdles to come to America.

We arrived in San Francisco last year on July 2, exhausted and happy to be home. I slept for pretty much the next few days, including the fourth. From my bed I could hear the screams of piccolo Petes and pops of firecrackers, the deeper booms of grander fireworks in the distance. I did not flinch, just registered the sounds of my country celebrating its beginnings and felt again deep gratitude for my amazing, beautiful, flawed, mish-mash, unique experiment of a country and its brave people, those born here and those not—all of us Americans we. *

Happy 241st birthday, USA. Thank you for all you’ve given me.

*Here’s a rousing version of that fine march by Henry Fillmore, written in 1929, and which years ago I played in several different bands. You can also click on the link above:
http://www.youtube.com/watch?v=H0TKaqTa6LM

10 Responses to Americans we