Not the celestial kind. Not the Hollywood kind. The seashore kind: sea stars, which as a kid I called starfish. They’re not fish at all, these rugged invertebrates that live in the cold waters of the Pacific Northwest, including British Columbia, where we are now. Dick and I went hunting for these echinoderms (nifty word for “spiny skin,” huh?) one morning here in Tofino, not to harass them but to shoot them, photographically speaking.

We got lucky with super low tides this week when we’ve anchored ourselves like human barnacles to this coastline. Also lucky with weather–cloudy, cool mornings with sunny afternoons in the 70s. We hear it’s 100+ in Sacramento, which is what it was when we decamped a week ago to drive north to Canada. People often ask us why we’re not summering in Hawaii, and the answer is simple: Because it’s humid there now and hot in Sacramento… this is when we head north. We hit Hawaii generally in the winter when our town is freezing—or close to it. We love British Columbia—specifically Vancouver Island—in the summer.

Tofino is the nail on the end of a thumb-shaped piece of land attached to a larger peninsula on this huuuuge island of Vancouver, which makes the big island of Hawaii look small by comparison (though the Big Island gets points for its active volcano—go, Pele!). Tofino is a fishing village, really, where for thousands of years the First Nations people have, yes, fished, and lived in villages scattered among coves and trees and ocean. You get a lot of all three here, which we like, though we are not as brave as many of the visitors who show up to—delightfully nutty people!—surf.

Yes, surf. Tofino is the west coast (of Canada) surfing capital, and though we Californians are amused to see black wetsuit-clad people ottering themselves onto boards to take to fairly small waves, we always like to watch surfers. They’re tackling, at best in summer, Waikiki-sized waves (which is to say smallish), but kids and families come to this coastline and hit water we consider freezing for their sport. They’re not exactly shootin’ the curl, as the big wave surfers say (there’s not much curl in these waves to speak of), but they sure look like they’re having fun.

The young man who pumped our gas today exclaimed over the fact that in Hawaii, you can surf without a wetsuit. He’s a local boy, grew up here, fishing and canoeing and surfing, is used to the temperature of this water. He knows well that the current size of the waves is deceiving. In winter, people come from all over to sit on these shores (or in dry hotel rooms or around fireplaces) and watch (through windows) ginormous waves roll in over the Pacific. Tofino is one of those rare places outside of ski resorts that increases its hotel rates in winter, for heaven’s sake, to take advantage of the storm-watchers.

Dick and I, however, love summer’s fair weather and morning low tides here. We take off across the packed sand (easy walking) for the southern end of Mackenzie Beach where the mid-morning tide has receded so we can stride over sand normally underwater between what in Hawaii are called motu (reef islets with vegetation). There, on the undersides of worn black rocks that look to us volcanic in origin, we look for temporarily drydocked sea creatures.

I always go tidepooling while thinking of my girlhood best friend, Sue Lester, who knew from the time I met her when she was going on 9 years old that she wanted to study marine life. Today she’s Dr. Sue Lester, DVM, but before that she earned a master’s degree in marine zoology. She’s the one who should be here, I always think, as Dick and I walk over squishy sand and look carefully through cascades of kelp to peer at sea stars.

They’re gorgeous here, so many fat, specimens like this: 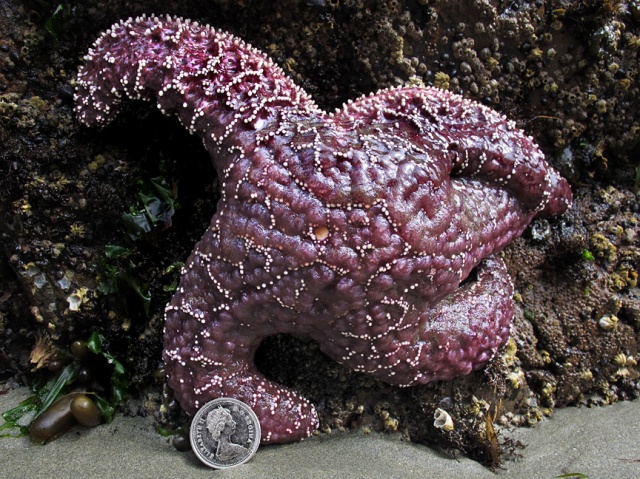 But the whole West Coast has had a massive die-off of sunflower sea stars in recent years, possibly caused by a virus, according to scientists and UC Davis (yay, Davis! Dr. Sue’s alma mater). It could also be that warming seas are helping turn the stars to goo, which is weird for these major ocean predators that typically eat mussels, clams, oysters and urchins.

This is why I wish Sue was here. She could look at the sea stars and tell us how she thinks they’re doing, along with the anenome, which look to me like fat and sassy cats lounging around with their tentacles waving seductively, just waiting for the next fish, worm or zooplankton to come along. When we were kids, I went to the ocean with Sue numerous times, where she showed me that if you tickle anenome tentacles lightly with a finger, they’ll close up. “But that’s teasing them,” Sue said. “They think they’ve got food, and it takes them a while to open up again.”

Anenome waiting for prey to come along. (Photo by Dick Schmidt)

For years I’d tickle anenome when I found them at low tide, and even when she wasn’t around, I’d hear Sue expressing consternation. I rarely do now, but I think of Sue every time I see these sea critters and am grateful to my childhood BFF who taught me about them, especially not to be squeamish around them. Anenome, with their tiny, poisonous (to fish) harpoons, can digest fish flesh in 15 minutes.

And that’s not all. “You know that a sea star can pry a clam apart and push its stomach out through its mouth and then swallow the clam,” Sue would say, watching me wrinkle my nose. Sea stars and anenome didn’t look like vicious hunters to me, though they are. But Sue knew stuff like that. She was the only kid in my world who, when one of her tropical fish died, might dissect it under her kid-sized microscope before giving it a respectful burial in her mother’s flower garden. Once we were teenagers, she’d borrow her dad’s 35 mm. camera in the spring to take closeup photos of wildflowers. She also played sax in the school band, was a year older and a head taller than me, and, whether she wanted the title or not, became the big sister to my younger sister and me.

She did her graduate work in Bermuda, learning to scuba so she could collect and study tiny worm-like filter feeders called pterobranchs, and after that she became Dr. Sue to hundreds of pets and their people in her work as a veterinarian.

Sue still loves sea life, and she always prompts me (even from far away) to Seas the Day and get out there and look (carefully!) at the critters whose home we’re walking on and around. I step lightly, looking for hidden residents (the anenome don’t always cling to rocks), and look into tidepools where tiny sculpin fish flutter and settle and disappear in sand, chameleon-like. And I take photos of the sea stars, so many of them in this corner of Mackenzie Beach, amused at their funny contortions as they tuck themselves under rock ledges. I marvel at the life here, in the ocean, this place where all life comes from, where we return, like salmon, where we are restored and reborn just by visiting it.

We are the sea, we creatures made of salt and water, and in this place where long strands of kelp lie temporarily arrayed on the sand like someone’s long hair and sea grass flops over like green bangs, I am reminded of the literal ebb and flow of things. Hours from now, this place will be filled with water again. The sea stars and anenome once again in their natural habitat will resume their endless quest for food just as the sculpin will try not to become food for others. 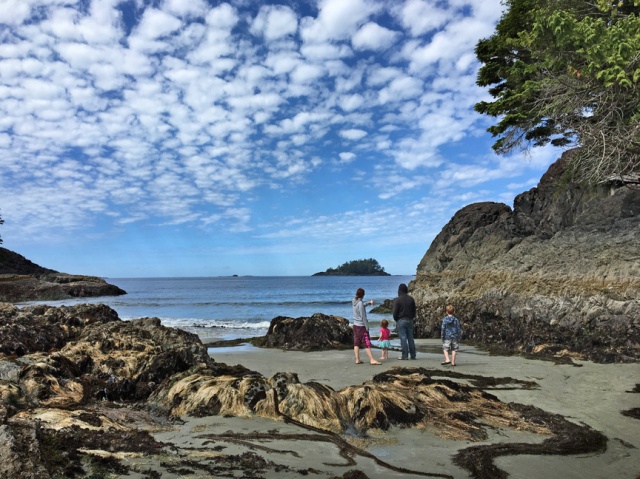 But the ocean welcomes us by parting its watery curtain each day and letting human footprints become part of the landscape. Rachel Carson, author of “The Sea Around Us,” was right: “The edge of the sea is a strange and beautiful place.”

And, Carson said, “It is a wholesome and necessary thing for us to turn again to the earth and in the contemplation of her beauties to know the sense of wonder and humility. ”

Here’s to that knowing.