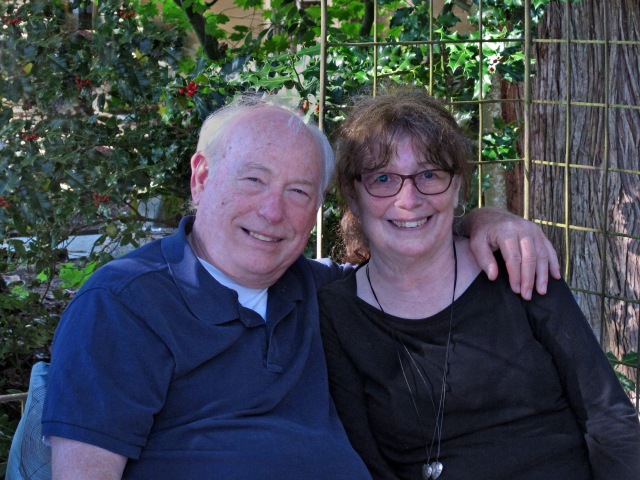 Ron and Georgann Turner at home in Bremerton, WA

I often stop myself when I start to write about my BFF because… it’s complicated. Not our adoration of each other—that’s simple. We have been best friends ever since, way back in the last century (the 1980s!), we met when she was a returning student at Sac State and I was an adjunct professor in journalism. She liked coming to my classes to hear guest speakers, though she never took a class of mine. We got to talking, liked each other, and, when she went off to Wales to finish a bachelor’s degree in her 40s, she said something that I’ve never forgotten:

“If you write to me, I’ll be your best friend.”

I did—on the thinnest blue Aerograms, which were the cheapest way to send international (snail) mail in those days—and she did, and as we learned to decipher each other’s handwriting, we became penpals, writing sisters, close buddies.

I was hesitant at first to call her my “best” friend because, well, I already had one (lookin’ at you, Sue Lester!), the girl who grew up next door to me, whose mom was our Girl Scout leader (thanks, Mrs. Lester!). My sister Donna is clearly the best (never mind that she’s the “only”). And then there was my band buddy, Lisa Morgan, who certainly fell into the superlative category. Not to mention the college buddies: Gina, Curtis, et al. They (and others) are “bests,” too. (This grammar teacher is putting aside the notion that there’s only one who fits the superlative adjective.)

But Georgann (BFF GAT) decided that I was her BFF (JLH) almost as soon as she heard that term years after she moved back to California and remarried a lovely man (hi, Ron!) and adopted three kids in addition to the two she bore, and long before she learned that she had cancer. She had major surgery in 2009 to remove a portion of her intestine in 2009, but some cancer cells have remained in her pancreas.

That’s the complicated part of the story—watching someone you love cope with tremendous pain, who has fewer good days when she’s up and about and active than the days she’s in bed. And I’m only loving her from afar. Ron is her major caretaker at their home in Bremerton, Washington. (Best husband, Ron!)

Recently, a CAT scan revealed a different kind of cancer present in Georgann’s hip.  There is a specific treatment for this type of cancer, a drug called Zometa. However, Zometa has a side effect of weakening the jawbone.  If Georgann has any serious dental problems, like needing to extract a tooth or replace a bridge, there would be a high risk of necrosis in the jawbone, which would be very serious.

So before Georgann can start being treated with Zometa, she needs to get all her dental work done.  The strongly recommended dental procedure in her circumstance is extraction of all teeth and insertion of four implants, around which new permanent dentures would be placed.

The estimated cost of this procedure is $50,000, and her medical insurance will not cover it.  Her dental insurance limit is $1,000.

So I’ve launched a youcaring campaign to help Georgann and Ron begin to raise the funds for her dental work. If you can help with any amount, the Turners and I will be most grateful. They insist that all money raised should be considered loans, and that they will pay the donors back within one year.

Here’s the link, if you’d like to donate:
https://www.youcaring.com/georgannturner-1135159

Thanks, dear friends and loved ones… all of you are best in my heart. My BFF GAT and I send you the biggest hugs for your kindness.

4 Responses to The BFF