Today I shall behave as if this day is the day I will be remembered.
—Dr. Seuss 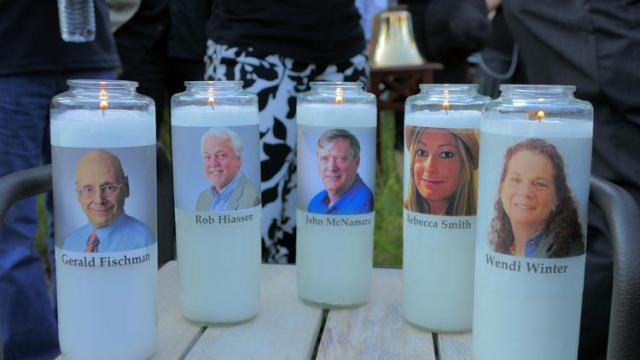 The five victims of the June 28 shooting at the Capital Gazette in Annapolis, Maryland. (Photo/Karl Merton Ferron, Baltimore Sun)

Did any of them think that as they went into work Thursday morning, that this would be the day they would be remembered, the five whose lives ended in the newsroom? Did any of them think, as they typed or talked on the phone, walked to the copy machine, got coffee, “This will be my last day”?

I can’t imagine that they did. And yet it was for four journalists and one sales assistant, who together, according to a CNN story, had more than 75 years experience in the reporting, editing and delivery of news. Their lives ended when a disgruntled reader, who had threatened the paper for years, turned into a gunman who opened fire through the glass door of the newsroom of the Capital Gazette in Annapolis, Maryland.

For the record (the old journalist in me wants to note in the third graf) the people who died were: Gerald Fischman, 61, the newsroom’s editorial page editor; Rob Hiaasen, 59, an editor and features columnist; John McNamara, 56, a sports reporter and editor; Wendi Winters, 65, a local news reporter and community columnist, and Rebecca Smith, 34, a sales assistant.

I didn’t know any of them, though I knew Rob Hiaasen’s writing. He’d been an assistant editor and Sunday columnist for the Gazette since 2010. Someone sent me a link years ago to one of his columns, and I’ve followed his work ever since.

Hiaasen was 59 years old—my age—and, in addition to his work at the paper, he was a brand new adjunct professor the University of Maryland where he’d just taught his first advanced newswriting class to eight students.

He’d been a news anchor and reporter at news-talk radio stations throughout the south, and he was the brother of best-selling author Carl Hiaasen, who wrote on his Facebook wall Thursday night, “What [Rob] would want me to say was everything [they did] was for the readers.”

And, Carl Hiaasen added about his brother, “He spent his whole gifted career as a journalist, and he believed profoundly in the craft and mission of serving the public’s right to know the news.”

By the time I read this last night, I was so teary, I kept having to dab at my eyes to keep them from dripping onto the keyboard. I didn’t know them, but I knew them. I knew the small newsroom with perhaps 20 people in it who put out a daily newspaper. I knew the characters of a newsroom; I was once one of those characters. Leaving newspapers for first a wire service and then a magazine broke my heart, though I often say that the newspaper left me—or at least it did after it laid me off.

But that was on a large metro daily. The small newspapers—two of them—were where my heart lay. The second one, the Vacaville Reporter, as it was known in the early 1980s, took me in, embraced me, put me to work and gave me a community of colleagues whom I treasure to this day (though many of them have died). I knew the cop reporter with a bottle of whiskey in his desk to help him through the stories that tore out hunks of his soul. I knew the grumbling city editor and the young female managing editor, the assistant sports editor who covered the high school teams where he’d once gone to school. I laid out waxed strips of copy on large sheets of paper that would become the paper, shoulder to shoulder with the publisher, joshed with the paste-up guy designer who became my best buddy, shared an office with the “soc hen,” as society editors were once derisively called—though she was so much more than that, truly the best feature writer on the paper. The man who became my husband got his first full-time job as a photographer there, which turned out to be his last job, 20 years later when he died.

Those people became my mentors and friends, my post-graduate education in journalism before I ever got a master’s degree. It is no exaggeration to say that they helped make me a journalist more than my time editing the college newspaper (which was also significant). They set me up for the rest of my career on that wire service, the big newspaper and the city magazine, and eventually as a journalism professor.

Participants in a candlelight vigil for the victims of the shootings at the Capital Gazette march down Main Street in Annapolis, Maryland. (Photo/Jerry Jackson, Baltimore Sun)

And though they were not people I knew, the deaths of people at the Capital Gazette struck me like a backhanded blow—also because my student editors whom I advised last semester at my community college wanted to talk about journalists in danger. Not because they cover wars but because they just do their jobs. “What if someone walked in our newsroom with a gun?” they asked in March. This was not an outrageous question; my college had a campus shooting a few years ago, and a student was killed. It was a targeted, gang-involved shooting, and we were not overtly threatened, but we didn’t know that at the time.

So we had the hard conversation that I’ve thought about for years: that we cannot guarantee our safety, that, yes, anyone could walk in and threaten us, hurt us. I’ve been in occasional situations with journalism students over the years when upset people came through the door hollering. Those were scary moments, but luckily for us, the worst thing that happened was the time an angry someone went around campus, gathered up all the issues of the paper and threw them away.

But now the paper is online, updated daily, printed monthly. My students’ work is more visible than ever, and, consequently, so are they.

“I hate that I can’t protect you,” I told them after a horrendous murder spree at a Northern California veterans facility earlier this year. “I hate the fact that all of us, but journalists in particular, are more vulnerable than ever before. People will sometimes put comments on your stories on the website and say awful things. You may get hateful emails and phone calls.”

And that was before someone called my editor-in-chief, a woman in transition, a “faggot” on the phone.

The Capital Gazette people were targeted by an angry, probably deranged man, but so could any journalist. In other countries journalists are killed far too often. But, I naively thought for years, not here. Not in the United States.

And now, in the current climate of hate, I know that that’s no longer true. Regular, workaday, small-paper journalists. As Petula Dvorak, Washington Post columnist, wrote:

“These are not the people chasing congressmen through the halls of the Capitol, or wrangling with CIA officials for information on the latest terrorist cell. Ever read about the construction on your street, the plans for the new rec center, who won the crab contest, how the state delegates voted on highway funds or about the uptick in crime at the mall?

“As Gazette community news editor and metro columnist Jimmy DeButts tweeted, ‘We try to expose corruption. We fight to get access to public records & bring to light the inner workings of government despite major hurdles put in our way. The reporters & editors put their all into finding the truth. That is our mission. Will always be.’

“This is local reporting. This is journalism.”

And somewhere from deep inside themselves, a small crew of journalists—writers, editors, photographers—went to work after the horrible events of that day. 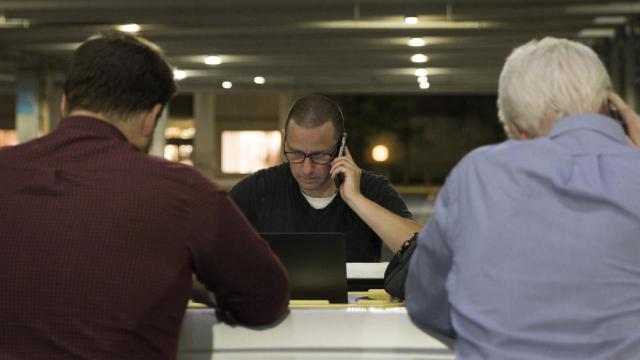 Capital Gazette journalists, including Joshua McKerrow (facing forward), worked to report the story of the attack on their newspaper from the back of a pickup truck in a parking garage after the shooting. (Photo/Thalia Juarez, Baltimore Sun)

Chase Cook, a Capital Gazette reporter, tweeted in the hours after the shooting. “I can tell you this: we are putting out a damned newspaper tomorrow.” He later told The Baltimore Sun: “I don’t know what else to do except this.”

And he and his colleagues did. Someone had the brilliant idea to center 57 words including the names of the people who were killed on a mostly white editorial page in the next day’s paper.

As journalist and humorist Dave Barry, a good friend of Carl Hiaasen’s wrote on his blog: “…the news people I know are still passionate about what they do, and they do it remarkably well. And here’s the corny-but-true part: They do it for you. Every time they write a story, they’re hoping you’ll read it, maybe learn something new, maybe smile, maybe get mad and want to do something.”

That’s what the people were doing at the Capital Gazette when they were shot. They were gathering words and photos, headlines and ads to assemble into the next day’s newspaper. And their colleagues, despite the day’s events, immediately got the news out through social media, then began to call sources and interview people for stories and photos that went up on the paper’s website, then assembled those pieces into an old-fashioned, actual newspaper the next day.

Because that’s what journalists do—find the truth, write the first rough draft of history (as former Washington Post publisher/owner Phillip Graham said), and go out the next day and do it all again.

If you’d like to contribute to a fund to benefit the families of those killed at the Capital Gazette (set up by Madi Alexander, a Bloomberg journalist in Washington, D.C.), you can do so here: www.gofundme.com/capitalgazette.