So first, to call it “the big muckle” is a wee bit redundant, it seems to me, but you’ve gotta hand it to the Scots when it comes to a fine word. And then, when you understand that this is what the White Heather Tea Room in Victoria, B.C., calls its biggest array of tea goodies, and when it arrives, three tiers tall of savouries* and sweets, you really appreciate the term.

And second, if anyone ever needed further proof about how much my fella loves me, all they’d need to know is this: Not only does he follow me into bookstores never asking, “Are you finished yet?” but also when we’re in Victoria, he follows me into tea rooms, this man who doesn’t drink tea, and doesn’t make fun of the fussy finger sandwiches. OK, he teases me a little, but only enough to make me laugh.

Last year when we were in Victoria, Dick accompanied me to the White Heather Tea Room, which is my current favorite spot for tea in the city. Yes, people talk about going to the grand Empress Hotel for tea, and that’s all well and good, but I like a simple, single room where every place setting has a different cup and saucer. Where they bring out homemade scones so fresh you can smell the oven on them, and the little cups of lemon curd and clotted cream make my heart sing. (And yes, if you know me, you know that I try to avoid sugar, but in Victoria, at tea, I make an exception.)

I attribute this to the early influence of two Englishwomen, Molly and Barbara, who were friends of my godmother’s. When I was 19, about to go on a college tour in and around London with my favourite* history professor Jim Straukamp, my godmother Jo Corbin arranged for me to spend a few days with friends of hers “in the country.” An aspiring Anglophile anyway, I’d sat in Dr. Straukamp’s Tudor/Stuart history class at Sac State and salivated over stories of the battling sisters (Mary and Elizabeth), the other queen Mary of Scotland (whose son James eventually became Elizabeth’s heir and king of England). When he said he was leading a trip to London over winter break, I knew I had to go. I used my summer money earned as a lifeguard/swimming instructor/coach and, with my parents’ blessing, departed for London.

And, in the middle of that trip, I spent time with Molly and Barbara in their 400-year-old thatched-roof Tudor cottage in Suffolk. These two retired schoolteachers (Barbara was the headmistress of a girls’ school in Sudbury; Molly taught art there) lived together for years and spent much of their retirement travelling* the world. They met my godmother in Southern California through mutual friends, and in an any-friend-of-yours kind of way, took me under their wings to show me around. Barbara made Yorkshire pudding to go with the roast beef, and I was instantly hooked.

They introduced me to the shandy (half beer, half lemonade… not my favourite*), and they took me out to tea (“proper tea”) and stuffed me full of scones and clotted Devonshire cream, which looked like whipped cream to me but was ever so much better. We went to tea at least three times in small, single-room settings with white tablecloths and a mish-mash of china on the tables and morsels I’d never seen the likes of before.

I thought I’d died and gone to heaven. In England. During a bloody cold January. That’s how much I loved it.

On their next trip to California, Molly and Barbara came north to meet my parents, who put them up and showed them around our neck of the woods. Their favourite* part? Tower Books on Watt Avenue (where Molly bought me my first volume of Rumi poems) and next door Country Club Lanes.

“Do you want to bowl?” my mother asked them.

“No,” they said. They just wanted to watch, the two little old (to me) English ladies, who remembered watching American GIs bowl during the war. And they did, with rapt attention, for a good half hour. I wish I’d asked them what they were thinking about as they watched.

Molly died in 1986 in their cottage called Waylands in Lavenham, and Barbara died a few years later. I cannot sit down to tea with triangle cucumber sandwiches or pinwheels of bread and smeared ham or scones with clotted cream and not think of them. Such was the early influence of Real Englishwomen on this California girl. And, a few years ago, finding the White Heather Tea Room in Victoria brought Molly and Barbara back to me in a big way.

But, I realize, not everyone shares this affection for tiny sandwiches and cake and tarts and scones. 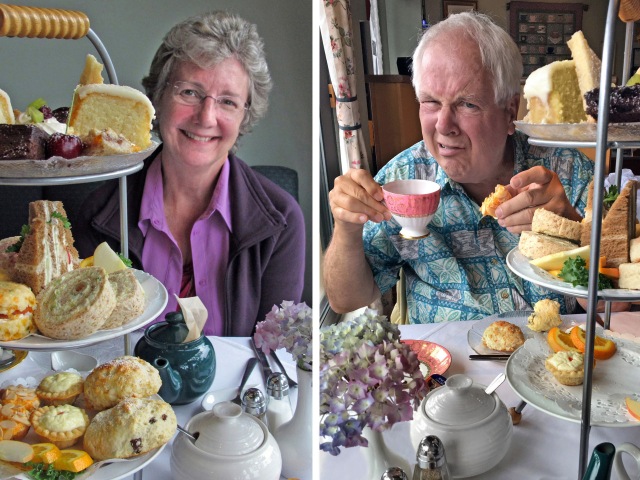 Last year we sampled the Big Muckle at the White Heather, and even the non-tea drinker, who vastly prefers Pepsi, gave tea a chance. (That’s how much he loves me.) But! He discovered that he was inordinately fond of the White Heather’s lemon curd and some of the best homemade shortbread we’ve ever had.

Just today we returned to the White Heather for our 1:30 p.m. seating, and I told Dick that one of the reasons I chose the place was because this time I could have a smaller tea service (the “Not So Wee” Tea), still with lots of goodies, and he could have a sandwich. He selected a black forest ham and Swiss cheese grilled sandwich on foccacia with (and this surprised me) cold cantaloupe soup (“It was weird because it was cold, but you wouldn’t want it warm,” he said, adding that he liked the flavour* of cantaloupe).

Turned out Dick was most happy. And he did not have to think this:

No, he got to have a proper lunch, and I got to have a proper tea, and yes, I shared the lemon curd, scone and shortbread with my fella, who enjoyed that part just fine. I did not make him drink tea; he chose plain old water, though there was “pop*” on the menu. I loved the cucumber sandwich, mini quiche and mini scone with (today) chicken salad, the pinwheels with egg salad and ham salad, the yummy green and black blend they call Mad Hatter tea… and oh, yes, gobs of Devonshire cream on the big scone.

The fact that we did this today on what would have been my father’s 88th birthday also made me happy. We got to lift lunch, as Dick likes to say, with several of our companion spirits, American and English—Aunt Jo, Molly, Barbara, Dad (who probably would have preferred the shandy… or more likely just the beer).

(*Yep, English/Canadian spellings… when in Victoria…)

7 Responses to The Big Muckle