I have the great good fortune to be the proud aunt to the most amazing niece and nephew. And I’m not at all biased. I would’ve loved them had they chosen to pursue careers in, say, architecture or business, but both Lauren and Kevin Just decided to become teachers, like their father, who has taught high school art for almost 30 years.

Lauren teaches eighth grade at a Rocklin charter school, and, after a few years teaching elementary school music, Kevin has just begun to teach band, orchestra, choir and guitar at Granite Oaks Middle School in Rocklin. My family all loves this because (a) we’re a pretty musical family (Kevin and Lauren’s parents met in the Sierra College symphonic band), and (b) Kevin and Lauren attended Granite Oaks (or GOMS, as it’s stenciled on the backs of their folding chairs). Lauren went the first year it opened, in 1999 (way back in the previous century). Kevin followed a couple of years later.

There, they both participated in music—Lauren in choir, Kevin in band—with Mrs. Dick, whose husband, Mr. Dick, ran the Rocklin High band program. David and Mary Dick, it turned out, had a lot to do with making Kev into a genuine music man, the leader of the band. They began mentoring him, it seems, from the moment they met him. And when Mary retired from her job at Granite Oaks this past June, it didn’t take long for Kev to succeed her.

It seems like just yesterday that Kevin was playing a trombone nearly as big as he was in Mrs. Dick’s band before graduating to Mr. Dick’s band at the high school. And then he went to college at Sac State, majoring in music where he was mentored by band director Clay Redfield (who also played in the Sierra College band) and where Kev fell in love with Clay’s oldest daughter Ashley. They’re getting married next summer.

So it was that my very musical mother (Kevin’s grandmother, a 54-year Sweet Adeline barbershop singer) and Lauren and I settled into those GO folding chairs in the multi-purpose room Thursday evening to watch our music man lead the seventh grade choir and the orchestra in his first winter concert at the front of the stage. Mr. and Mrs. Dick were there, too.

Lauren and Kevin Just with their grandmother, Darlene Haag

We (amid a sizable audience) watched Kev conduct his choir through a diverse program of songs from Mozart to “Jingle Bell Rock” to “The Sound of Silence,” and then lead the orchestra through “Simple Gifts” and “Carol of the Bells,” among others. I leaned over to my mom and whispered, “And we changed his diapers,” as she grinned.

The best part, though, was after the concert was over and Mom, Lauren and I joined Kevin behind the curtain onstage. There he was talking to Mary and David Dick, who looked to be as proud of him as we were. 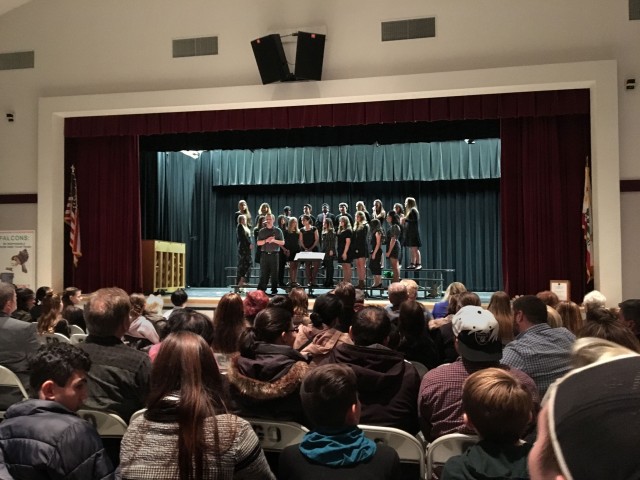 Just before we said goodbye onstage, one of Kev’s violinists and her younger sister came up to Kev to introduce them. “My sister wants to be in the band,” the older sister said. “She wants to play clarinet.”

“How old are you?” Kev asked the little girl, who was staring up at him with big eyes.

“That’s a good time to start,” Kevin told her smiling. “Then in three years you can be in this band.”

The girls’ mother and father stood nearby, and walked up to the little trio. “I want to thank you,” the mother said. “She is growing so much from the music and from what you’re doing.”

As Kevin thanked her, Lauren, my mom and I stood nearby, listening, not saying anything. I thought of my sister and brother-in-law, who were called suddenly out of town but who usually never miss a concert. Our pride must’ve shown all over our faces. I resisted the urge to say, “That’s my nephew. I changed his diapers.” As if I had much to do with this young man’s success or fabulousness, for that matter, or that of his sister.

But I have to say that as much as I enjoyed them when they were little (oh, the fun we had!), it’s been even more fun to watch these kids turn into amazing grownups now in their late 20s and early 30s, coaching and cajoling, teaching and mentoring others as they were taught and mentored. They both run tight ships—nobody puts anything over on Mr. Just or Ms. Just. But they clearly love their students and have landed in careers that suit them down to the ground.

And we old folks who knew them when they were pups, we watched our young music man lead his crew though songs, classic and pop, that will stay with them for years to come. Who knows? Kevin’s one-day successor may be among those students, some unassuming kid learning his or her instrument or singing alto, learning to love music because of a very good teacher. 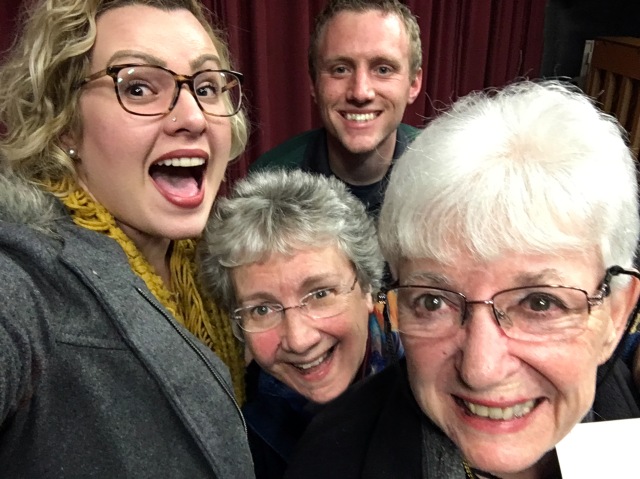 1 Response to The music man