I can’t tell you how many times I’ve thought or whispered to myself as I’ve walked down the stairs to the cafeteria here at Kaiser Moanalua Medical Center, “All shall be well, and all shall be well, and all manner of thing shall be well.” Regardless of what happens next. Which is a difficult posture to maintain—life or death… recovering from a cardiac bypass… Yes, Life Is Good. And we have been graced with the kindness of strangers and people we barely know throughout this whole experience.

For example, today in Room 324, we had validation of that all manner of thing shall be well with the arrival of two four-footed furry friends making the rounds with their people.

Tono Kai, a local service dog, travels the hallways of Kaiser Moanalua Medical Center with his person, Mel Kai a couple of times a week. They’d visited us once before in a room across the hall before Dick’s surgery, and we both melted at the sight of the big blond dog with his blue bandana and official Kaiser ID hanging from his collar.

Mel asked if we wanted a visit, and though Dick couldn’t see them at first from the bed, I jumped up and said, “Oh, yes!” So they came in and, after sniffing each of us, Tono lay down on the cool floor. I got down there with him and learned again that Tono enjoys head scratches (like Dick) and belly rubs (Dick not so much right now), and is a master healer.

We’ve enjoyed visits from a number of folks here—some of whom we know and some of whom are new to us. Yesterday Sue Young, one of Dick’s friends whom he met in the 1970s when he lived here and worked for the then-named Honolulu Star-Bulletin, came to see us. Sue was married to Bob Young, who became Dick’s best Hawaii buddy. He and Dick stayed close until Bob’s death a decade ago.

And in one of those there-are-no-coincidences moments, we learned that Bob Young’s sister Jackie was also in this same hospital. She’d had a stroke and was in a room two floors above ours.

Today we also got a visit from Jervin Wait, who took a series of local buses out to see us. He and his wife Dolly spend four months in Honolulu every year, escaping part of a South Dakota winter. They bus everywhere, and though Jerv (who is a high school friend of Dick’s brother-in-law, John Thompson) doesn’t know us, he’s been kind to email and make a visit.

Hawaii Jan (as we call her; I’m California Jan), the daughter of one of Dick’s former Sacramento Bee photographer buddies, has been a lifesaver. Not only did she find us the rental house we’ll stay in starting Wednesday, she also brought us supplies to make our stay here easier (the warm pink sweatshirt-material blanket!) picked me up and took me to lunch last Saturday. Few visitors get to lunch at the Alley Restaurant, which is a part of the Aiea Bowling Alley. I had the specialty chicken sandwich, Jan had a good-looking burger, and we both shared the lemon crunch cake, which had what tasted like crushed toffee on top. Heaven!

Also today we got a second visit from a four-footed, furry friend named Indy, who arrived with his person Steve. And chaplain Leavitt Thomas has been in pretty much daily to chat with us. Andy and Leona Doughty, who came to take me to dinner the night before Dick’s surgery and then sat with me during the surgery, as well as my former student Makena Ongoy, who’s done Target runs and bought me stuff I’d never have thought of… this has meant the world to us.

We’ve been bidding our fond aloha to nurses and health aides who’ve tended to us over the past two weeks, to internal medicine docs and cardiac folks—even the cafeteria ladies—each of whom has treated us like ohana—family. We are beyond touched by this. And while it’ll be nice to let Dick rest in a house where he won’t be awakened so often, we’ll miss these devoted Kaiser Moanalua staff folks who have taken such tender care of him… and me, too.

Mahalo nui loa to you all. 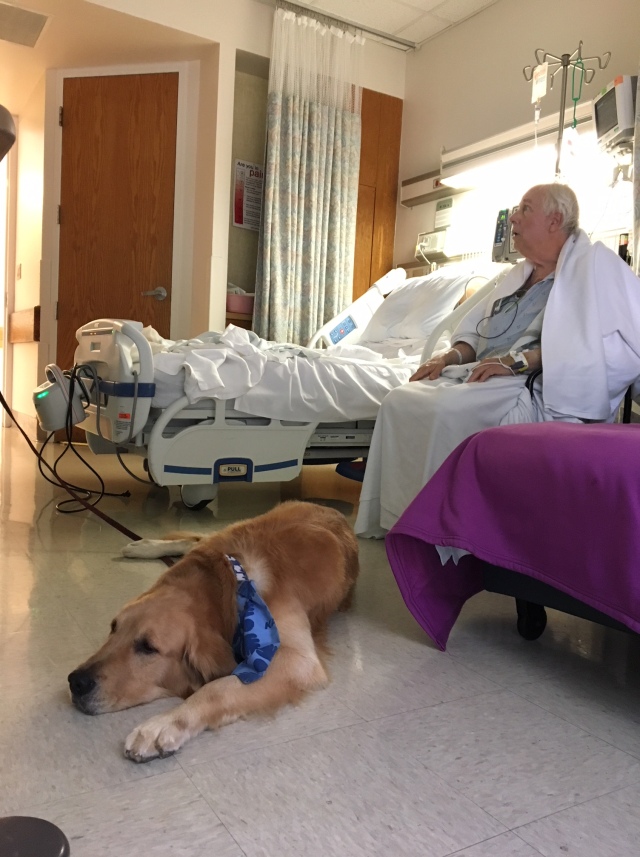