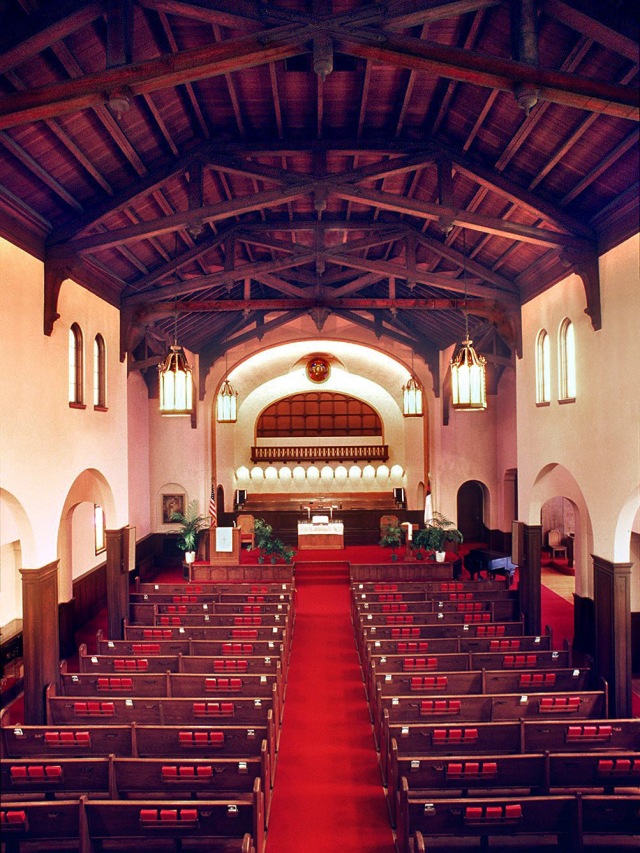 After retrieving my nametag from the tall usher in the foyer, I quietly opened the door and snuck into the Methodist Church called Faith that Dick and his family have considered theirs for decades.

The pre-service Easter music wafted up to the exposed beams holding up the pitched ceiling, and I was delighted, as I slid into the pew next to Dick and his cousin Ron Saylor, to see a friend of mine sittin’ in at the grand piano. Rachel Kang, a professor of music at Sacramento City College where I also teach, gave me a quick wave, never missing a note.

Though I’m not an official member of Faith United Methodist Church in Sacramento, I pop in periodically with Dick. Easter is one of those special occasions—not just for the religious reasons but because it was Easter 1999 when Dick’s mother attended church there for the last time before she died nine weeks later. Dick’s parents and many of his relatives, including his sister and her family, have been an integral part of the backbone of that church. His mother and sister played organ and piano there; his father sang in the choir and sat on the church board. Dick’s cousins Leonard and Naomi Schmidt have served for decades as lay leaders and shared their musical talents—directing the choir, playing the organ and piano, and (my favorite) leading and performing in the Faith handbell choir.

To sit in Faith church is, I believe, an act of homage and love on Dick’s part, in memory and honor of his family and loved ones, and I’m always honored to be there.

This Easter, though, we also had people to thank—lots of people who had written and called and sent supportive messages after Dick’s cardiac arrest Jan. 15 and subsequent triple bypass in Honolulu in January. From Pastor Barbara Horikoshi-Firebaugh to Ron Saylor to friends like Elaine and Loring Pollock and Sara Zeigler, this would be the first time Dick got to hug some of them since returning from Hawaii.

It was also a chance for us to stand next to Ron, a Methodist minister himself with a lovely singing voice, and listen to him sometimes take up the melody, sometimes come in with a nice harmony. Dick remembers a much younger Ron, fresh from his home in Canada, coming to visit Faith church in 1961 and becoming quite taken with Dick’s cousin Carol, a fine pianist and composer. They later married and had two sons.

Easter is all about resurrection, and though it embarrasses Dick that I keep referring to his, I have to say that sitting next to him in church this Easter brought home the great emotional weight I’ve been carrying since Jan. 15. Especially when we were singing lyrics like the ones in “Christ the Lord Is Risen Today”:

I felt myself getting teary as I thought of The Resurrection of the man whose ascendance into heaven is the bedrock of the faith of these people of Faith. And then I had only to glance at the man next to me to feel more tears spill as we sang, “He lives! He lives!”

I know Dick is not the first person to come back to life at the hands of compassionate strangers who administered CPR and shocked his heart with a defibrillator. There may have been others like that in church, too. But this is my resurrected one, and when I think of that, I am moved to tears. I hope to be less emotional about it someday, but right now I dissolve while trying to sing, “You ask me how I know he lives? He lives within my heart.”

I see his hand of mercy, I hear his voice of cheer,
and just the time I need him, he’s always near.

For a few minutes there in an airport in Honolulu, I came face to face with the knowledge that Dick will not always be near. This was not news to me, but I hadn’t experienced it with him. I have lived through the death of a husband and have had literally hundreds of sweet examples of that one returning to me—in sleeping and waking moments—as my companion spirit. But, as I told Dick, although it’s not up to me, I really want to hold his hand of mercy and hear his voice of cheer for as long as possible.

So I did what I usually do in church. When it was time to sing, I clutched a first, a second, then a third tissue as the tears came and my nose ran, and I tried to make a joyful noise with my voice breaking. (It can’t hit high notes very well any more either.)

I held the hymnal given in memory of Dick’s mother, her name just inside the cover, and felt his hand close to mine, and I sang my gratitude—to the heavens, to God and his resurrected Son, to all the saints and companion spirits who helped return my beloved to me, here on earth.

4 Responses to He lives!