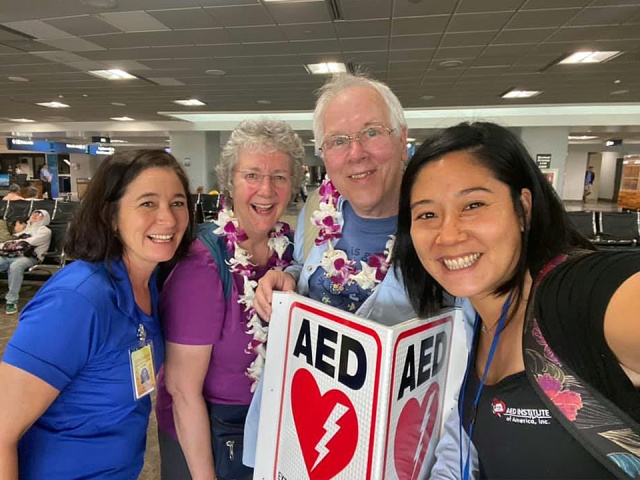 With our friends from the AED Institute, Kim Williams (left) and Jenna Tanigawa (right), who greeted us in Honolulu at the airport.

It’s not unusual for us, despite our great love for Hawaii, to look forward to coming home after a couple of weeks’ vacation there. There’s something about returning to one’s own abode, own bed, own kitties that tugs us toward that place we’ve made ours—in a completely different place than the ones we love in paradise.

Some might question that whole “paradise” label anyway. For on this two-week trip to Kauai, we saw a lot more stormy than sunny weather. This is not unusual on the north shore in winter, but even in drier Lihue and Poipu, it’s been a soggy January so far. We did not see the sun at all for all of the last week we were there. But that was OK.

Dick likes to call our January trips to Hawaii the “Restore Jan’s Sanity Trips.” And that’s true. They’re a welcome break between the hubbub of my semesters, which land me on my feet going 60 mph (Dick estimates it’s more like 80 mph) from day 1 to the end. I always say that I work 60 hours a week when I teach, and that’s probably an under-estimate. But 10-hour days are not unusual between school and home for any teacher.

I really love my job, I often say. I sometimes wish there was less of it. (And there will be one day, as I contemplate retiring in the near future.) But when you get to vacation mid-year in Hawaii, it makes the long hours more do-able.

So that’s one reason it doesn’t matter what the weather’s like in Hawaii in January. It’s much warmer than home, and even in the rain, I can put my feet in warm ocean, which might be the best free method of healing (literally great physical therapy for the ankle I sprained in October).

But with that warm rain and water also comes much aloha—that magical Hawaiian word for love, welcome, hello, goodbye and general affection. We experienced that tenfold last year after Dick’s cardiac arrest, subsequent hospitalization and CABG (coronary artery bypass graft), as well as two more weeks of recovery in a house we rented in Pearl City for Dick and our two friends Connie and Cora, who came to care for him after I returned home, two weeks into a new semester.

Turns out, the aloha continued this year on Kauai, too. Our friends, Toni and C.B. Martin, with whom we stayed in Haena on the north shore, greeted us with big hugs and aloha after following our ordeal from afar. They’ve literally weathered great storms, too, from the April 2018 flood that wiped out great swaths of the north shore to an infection in Toni’s eye that resulted in a corneal transplant. Their wonderful dog, Nugget, the golden lab, though getting up in years, is still a good greeter every time someone comes in the gate.

And we were also happy to see our friends Andy and Leona Doughty for dinner one evening. I’ve worked for Andy for more than 20 years, editing his best-selling Hawaii Revealed guidebook series, and they flew to Honolulu to see Dick the day before his surgery, take me to dinner and then sit with me the next day. Even before that, they made sure I had what I needed to live in the hospital for two weeks, including the assistance of one of their employees (and my former student) Mākena Ongoy, who made Target runs to bring me supplies and clothes.

Jenna, saying to Dick, “I can’t believe how good you look!”

But the aloha continued even as we made our way home. After we flew into Oahu from Kauai, we were greeted with leis and hugs at the airport by two members of the AED Institute team, Jenna Tanigawa and Kim Williams. The AED Institute was started in 2006 in Honolulu by Pamela Foster, RN, at the request of the airport fire chief, and has installed defibrillators all over Hawaiian airports and in other spots around the islands. We were pleased to see AEDs in prominent spots on the north shore of Kauai, too, sponsored by retired physician Jeff Goodman, and the Rotary Club of Hanalei Bay.

Jenna and Kim arrived with plastic AED signs to install in the airport. Since Pam Foster started the Institute, 69 people suffered heart attacks or cardiac arrests in Hawaiian airports. Fifty of those people survived, thanks to AEDs. Dick was No. 50 last year. Since then, the AEDs have been used seven more times at airports, and one more person has su, according to Jenna.

After some chitchat with Jenna and Kim, they offered to walk us to our next gate, E1, which is a good distance from where we came in. Last year, the walk between gates really fatigued Dick, who was on the verge of cardiac arrest but didn’t know it until he was suddenly dizzy. This year, he was fit and good for the whole distance (farther, actually, than last year). And when we got to Gate E1, another surprise awaited us.

“Dick, Jan, we want you to meet some of the first responders,” Jenna said as a line of tall, blue-uniformed airport firefighters stood waiting, including now-Assistant Chief Ronnie Arevalo, who responded to Dick’s emergency at Gate C1 last year. (Though we didn’t see them this time, we’re also grateful to Chief Martinez Jacobs, AED program director and ARFF chief, as well as Roy Sakata, airport manager.)

We shook their hands of those emergency responders and thanked them, stunned to see them, then turned around to see Hawaiian Airlines employees who looked familiar. There was Justin Nowak, senior operations manager, who arranged for us to see Guest Service Agent Heather Tanonaka, who was at the gate and contacted the first responders. There was Tuiatua Tuiasosopo, who was on the ground with passengers Claudio Alvarez and Salesi Maumau, who worked on Dick. And, we learned, Sarah Iida and chief agent Juliet Magbaleta kept the area clear and ensured that other guests could board the aircraft. 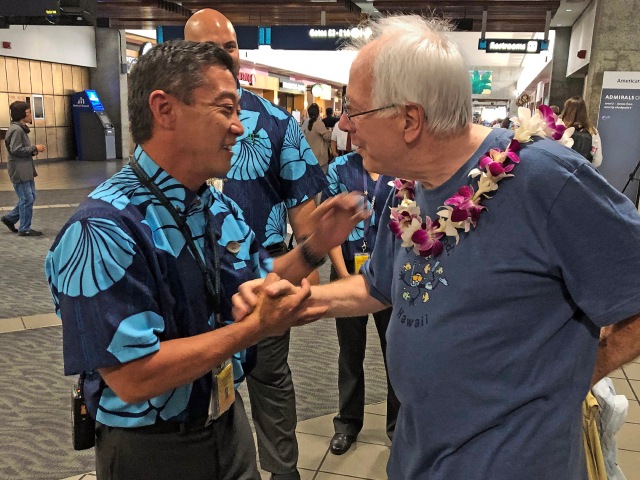 But the person I’ve most wanted Dick to meet was Hawaiian Airlines guest service agent Chris Ohta. He was at the gate when Dick collapsed and ran for and retrieved the AED. Then he joined Salesi, who was doing chest compressions, and Claudio, at Dick’s head monitoring his pulse. They placed the pads, and Chris pushed the button to deliver the shock that allowed Dick’s heart to restart.

I saw tears in each man’s eyes as they hugged. (Mine were a bit damp, too.)

Last year, when Dick, Cora and Connie departed Honolulu on Feb. 15, there was a tremendous celebration of life and press conference. Some of the same people who met us this year were there last year. But Chris was not working that day and hadn’t met Dick. I got to meet Chris when I flew from Honolulu home on Feb. 1. He and Salesi and Claudio, who didn’t know each other, worked as a team to bring Dick back to life, and they are especially dear in our hearts.

Last year Dick was interviewed by a reporter/photographer from the Star-Advertiser, the combined version of the two daily papers that used to operate in Honolulu. (In 1971 Dick took a leave from The Bee to shoot for the Star-Bulletin, as one of the papers was called then.) This year Dick was interviewed on video by two people from the Hawaiian Airlines communications team about his experience for the airline. Then Heather Tanonaka saw us off down the jetway, with Kim and Jenna waving aloha behind her.

And by the time we got on the plane, we whoomphed into our seats, hung our leis on the plastic attachments on the seats in front of us (the nifty doohickeys to hold your iPad or iPhone so you can access the in-flight entertainment), and dozed off.

We had a blissfully uneventful flight, retrieving luggage quickly, and took a shuttle to Dick’s car we’d left in the airport parking lot. We were pleased to find the weather dry and stopped for our traditional In-N-Out burgers on the way home (we generally don’t eat much on travel days). Hawaii has a lot of wonderful things that we miss when we’re not there, but they don’t have In-N-Out burgers!

And Dick, who in the days of his newspaper career, ate a lot of burgers, rarely eats them now. He is taking good care of his newly repaired heart, walking daily and watching his diet. But I watched his heart nearly burst with emotion (as did mine) at all the aloha bestowed upon us during this trip.

We continue to be nothing but “gratitudinous,” as Dick likes to say, for all that we’ve been given, can say nothing but mahalo nui loa (thank you very much) to our Hawaiian friends.

Looking up the meaning of mahalo on activerain.com, I found this syllabic breakdown:

It adds, “The complete translation, including the hidden meaning, reads, ‘Thankful to be in the presence of the divine breath of life.’ It both recognizes the divine breath in one’s self and the individual one is thankful for.”

That’s it exactly, what we celebrate every day now: the divine breath in one’s self and the many individuals we are thankful for.