Dick loves this name of this family of roses. He says it with great enthusiasm on the last two syllables—flori-BUNDA! We are amazed by the array of plant life in Tofino, B.C. It is a rainforest, after all, but still…. roses? Don’t they need sun and warmth—actual heat—to grow well? Not here. Flori-BUNDA!

We have learned a thing or two about coastal B.C. rainforest plants, which has been helpful as I put the finishing touches on my novel set in (wait for it) coastal B.C. Every time we’ve been in Tofino, high on the wild west coast of Vancouver Island, we’ve experienced typical rainforest weather. That is to say, fog with brief bouts of weak sun breaking through thick clouds. In June, July and August this place feels like San Francisco in the summer. And, as Mark Twain reportedly said, the coldest winter he ever spent was a summer in San Francisco.

When we left sunny Victoria for equally sunny Campbell River, halfway up the east coast of Vancouver Island, we hoped we might see the same bright sky in Tofino.  And on our second day, we did get some sun. Dick has the pictures to prove it. But most of the time it has felt like we were walking around inside a damp gray sock. Fortunately, we like damp gray socks and have spent a lot of time in them in the years I’ve been working on this novel.

The locals in Tofino have a name for this month in their area: Fog-ust.

Not everyone minds "Fog-ust" in Tofino.

It’s not really summer—July is summer, if they’re lucky. Fog-ust is what happens when warmer weather in the sky meets the cold water of the ocean. We have seen sun in Tofino, fortunately, in June and July. We did not know about Fog-ust before. We do now.

Mind you, I consider myself a lizard. I long for sun and bask in it whenever possible (though nowadays, far away from my years on a lifeguard chair and teaching swimming lessons, with SPF 30 or higher on). My idea of a great vacation runs to places like, oh, any Hawaiian island. But in most of the past eleven summers now Dick and I have migrated north for a time, like the geese. Even though it requires more clothing than I like to wear at this time of year, I have become a big fan of northern climes—Alaska on one memorable trip and more frequently western Canada.

Ocean Falls, B.C., where my novel is set, is reputed to be the wettest spot in western Canada, getting 140-plus inches annually. The first time we saw Ocean Falls, aboard a small paddle wheeler called the Empress of the North, the town relaxed under full sun till 10 p.m. on a summer night. We couldn’t get off the boat, so we saw what we could from the deck and decided to go back the next summer.

Ocean Falls, though on the mainland of B.C., is accessible only by boat or floatplane, and when we returned the following summer to do research for five days, we arrived in rain and stayed in it for the duration. The clouds settled over the mountains, smothering them like wool blankets, and if we hadn’t seen it sunny, we would’ve never believed the huge mountains existed. We walked the town—or what’s left of it, including the old paper mill that was the reason the town was created in the early 1900s—with borrowed wellies and umbrellas, having to return to our room in what had been the bank building to dry off the camera with my blow dryer.

But what we learned that first trip was, among other things, how green Ocean Falls is. Green with sprigs of pink and orange flowers in summer. So green you feel like you’re breathing in all permutations of it, from chartreuse to deep forest. Though I’d ask locals the names of plants and trees, I didn’t get the all answers I needed. For the past four days in Tofino, noticing how similar the plant life is there to that in Ocean Falls, I finally learned names.

The Tofino Botanical Gardens are a marvel. Created by George Patterson a dozen years ago, it’s a 12-acre site of everything that can grow in a coastal rainforest zone. (Tofino gets 130 inches of rain a year!) Dick and I walked around with George’s extensive guide to the gardens, me writing down names of things and questions to ask George later, and Dick doing what he does best, photographing.

I learned that the tall green stems with pink flowers bursting out that line the road between the townsite of Ocean Falls and the housing area of Martin Valley are fireweed. I learned that the huuuuuge, “man-eating” plants with leaves almost as big as a child’s wading pool are not called Audrey II (“Little Shop of Horrors,” remember?) but gunnera. Someone should add gigantica to the name, too. 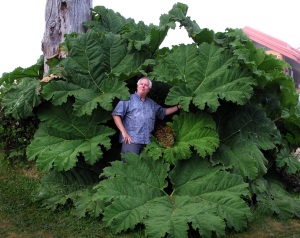 They’re Chilean rhubarb, and they’re non-natives, and apparently they spread like crazy. I learned that pretty much any herbs you can name will grow there and pansies, too. And surprisingly, lavender and roses do well, too. You need to grow tomatoes and squash in a greenhouse (they still require longer stretches of heat), but potatoes and carrots and lots of lettuces love the damp weather.

Of course, the growing season is about three months long, if you’re lucky, but hey—gather ye nasturtiums while ye may, along with the crocrosnea (tall-stemmed, scarlet lily-like blooms) and calendulas and just about any kind of berry, including native salmonberries, which bears are very fond of. This is all important in Ocean Falls, the novel, where my 17-year-old main character grows her first garden.

And scattered throughout the Tofino Botanical Garden are all kinds of surprises. Rhododendrons everywhere that must look like they’re putting on a party when they bloom in the spring. Gigantic red cedars (the B.C. tree) that can live 1,000 years and have girths a giant sequoia would appreciate.

She's a fine old thing... and the boat's not bad either!

There’s a 37-foot wooden salmon troller called the Evian that’s hauled up out of the sea near the mudflats. Visitors are allowed to climb into and look around.

We loved the surprises of garden art. Tofino Man, for example, is pretty nifty.

He was “discovered” in the digging of the garden. And we loved the unusual gazebo and Storytelling Hut created by Jan Janzen. In fact, my favorite art pieces in the garden are the forest spirits that stand just outside the Storytelling Hut. I love their simple forms, their happy smiles. They remind me of people I know.

We saw it all under soft gray skies, perfect light, Dick says, for pictures of floribunda and other blossoms. It was fine that the sun didn’t shine much. As George Patterson writes in his guide to the garden, “Most of our rainfall occurs in winter, but spring can be damp, the fall is rather moist, and summer is not dry.”

I love that. I’m using it in the novel. Thanks, George, for the incredible gift of touring your garden and your time to answer my questions. Even in Fog-ust, it’s an incredibly lovely place to spend an afternoon, soaking up the green, breathing in a B.C. coastal rainforest.

2 Responses to Fog-ust and floribunda