Those who made me

We all want to share our birthdays with inspiring people, those we look up to, admire for their talents or brilliance. This is why I have have never been eager to admit that my birthday falls on the same day as… (dramatic pause) Arnold Schwarzenegger’s.

He used to get a lot of press on his day (our day) when he was governor of Cal-eee-for-nee-ya, and people occasionally mentioned him to me, knowing that July 30 was my day, too. I’m sure he’s a nice guy and a good man. But in the pantheon of humanity, I’m sorry to admit, Arnold was not the guy I’d like to be closely associated with.

But this year, as this 1958 baby completes her 58th turn around the sun, my friend Deborah Meltvedt presented me with a card on which she’d compiled a handwritten list of others who also have July 30 birthdays (the parens are mine):

On my birthday this year, I met, as I typically do on Saturdays, with my writing group where nine people offered me more suggestions for birthday twins. I know of two others close to home: my across-the-street neighbor Sonya Hunter (who has complete three-quarters of a century on the planet) and my niece Lauren Just, who was born on my 29th birthday… and now she is 29.

As my father, whose birthday was Aug. 2, might’ve said about Deb’s list, “That’s more better,” just to watch my mother’s face turn purple at his intentionally bad grammar. (I can still get a rise out of her with “more better,” and I love it when she says, “And you’re an English teacher!” Yes, I am, too.) 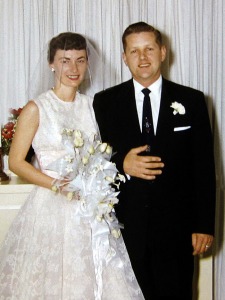 It is those two I am thinking of now, young and mad for each other in the first year of their marriage, 1957, making me some time in December. How surprised they must have been to learn, early in 1958, that they were about to be first-time parents in their first house they’d bought on Ostrom Avenue in Long Beach, Cal-eee-for-nee-ya. That house was down the street from my father’s sister, who became Auntie Lo to me and later to my sister—the best aunt ever who taught me how to aunt.

And yet my mother, who loved her job as a nurse at the Veterans Administration hospital in Long Beach, must have been a bit dismayed to realize that she’d have to stay home with an infant… who arrived a good month early, underweight and colicky and generally uncomfortable on the planet, a being not quite ready to be hatched yet. Daycare was either unavailable or beyond their means for someone who worked a lot of odd shifts in the V.A. psych ward.

My father was working, too, of course—until he lost his job several months before I was born, and a mad scramble ensued for my 27-year-old father to find a job. (I’m pretty sure there was no discussion of him staying home with the baby in 1958, though nearly 40 years later his son-in-law would take on the stay-at-home dad role with my father’s two grandchildren.)

My dad found a job, fortunately with the company that would employ him until his retirement near the end of the century—the job that put food on our table, as he would have said, and paid for braces and piano lessons and band instruments and college, ultimately, for two daughters.

My mother stayed at home with both of us until I was nearly 12, when she got credentialed and became a part-time high school nurse, which helped a little financially and a lot psychically since it both got her out of the house and put her skills and education to good use.

She was a woman born to work who spent much of her married life working at home as a mother and wife, supported by a man, something she warned her daughters not to count on. Into our tiny ears, she whispered, “You will grow up to go to college, find a career you love and not depend on a man to take care of you.”

She taught us to be independent, to make our own way in the world, which was a very smart thing. “You don’t have to marry and have children,” she told us. “But if you do, marry for love.”

My parents did, though they argued and tussled for many of the 47 years they were married, until my father’s death in 2004. But they were stubborn and loyal to each other and to their daughters, to whom they gave life and water skiing, band and a neighborhood newspaper, three dogs, a dozen cats, swimming lessons, college educations and tiny Honda Civics for commuting.

They did so much good they can never see. Only one of them still stands on the planet now, but I know they both hear my thankyouthankyouthankyou for my lucky and lovely life.

They were not perfect parents (none are, right?), but at my ripe age I can say with great pride that they were the perfect parents for me. I learned from both their mistakes and their successes (the latter of which far outweighed the former), going on to have plenty of my own. They built for me a strong foundation, literally, on the granite that undergirds Folsom Lake, where they plopped us in 1966, which is imbedded in my backbone, the rocks on which my life has been built.

They paved my way and that of my lovely and accomplished sister, the physical therapist and wife and mother to Lauren and Kevin, my sister who married a kind man who did, indeed, stay at home with their children for a time before becoming a high school art teacher. (Those two kids are now elementary school teachers… look what runs in our family!)

My parents gave me wings, which have flown me to where I am today—a former journalist/writer/editor/teacher/mentor/cheerleader to many. I learned that from them.

They set me on my way a good 40 years ago now and said, though it must have been so hard for them to do, “Fly, Janis Linn. We can’t wait to see what you will do in the world. We’re sure it will be wonderful.”

14 Responses to Those who made me