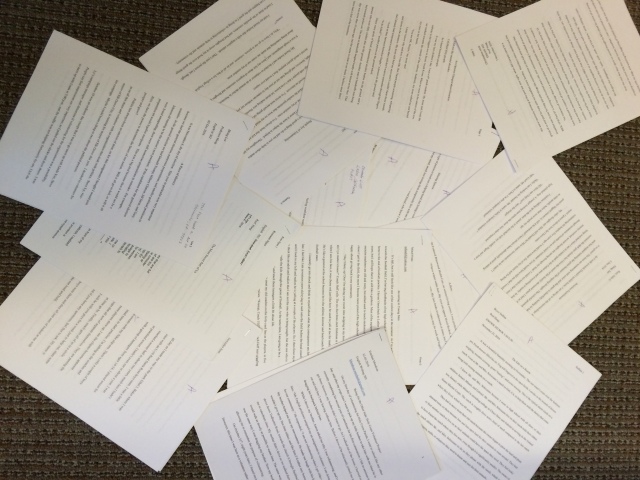 Though I am also an English professor, I spend much of my time at Sacramento City College teaching journalism and advising journalism students on campus publications. I helped create the college’s literary journal, Susurrus, in the early ’90s and spent 17 years advising that publication. I’ve advised the campus newspaper, the Express, on and off since 1993, when I became a full-time professor, and I have for some time advised Mainline magazine, a once-a-semester journalistic magazine that reminds me of my old days when I was the editor of Sacramento magazine. That was my last full-time job in journalism, which I left in 1992.

This is all to say that I have now spent more years teaching journalism (and English composition and creative writing) than I did working as a journalist. I knew that would happen, if I was lucky—and I have been very lucky.

One of the things that reminds me of that luck is the time I spend in my office at the end of a semester, reading through my students’ final papers. By now I’m tired and often fighting the cold that’s been threatening to overtake me throughout the semester, so I sit in my office and sniffle as I read—though not always because of the bug in my system. This week I’m reading 36 final writing projects by my English Writing 302 students. They make me smile and get a little teary—not because they are perfectly written/spelled/punctuated pieces (though a few drafts have improved most of them) but because of what the students have done.

I require an unusual final project in this class: The students must go out into the community and volunteer for an organization or individuals they don’t know well, if at all, and write about their experience as a piece of creative nonfiction. They get to star in their piece of persuasive writing (the dreaded first person most English teachers hate), but they also have to interview people, gather background about the organization or cause, capture dialogue and description, and write in scenes. It’s a challenging writing assignment, even more than a traditional research paper, I find. And, best of all, it can’t be plagiarized. I get to hear their actual voices on the page and see what they learn from donating time and energy to others.

You should see their faces when I unveil this final project on the first day of class. Before I even know their names, I can tell which students are going to resist the idea. One student this semester asked, “Can’t we just write a regular research paper?”

More than a few frowns and furrowed brows around the room.

“It’s great,” I enthused. “No matter what grade you get on the final paper, you get an extra credit A for volunteering. And you get to choose where and when you volunteer—you just need to check with me first. I approve most people’s ideas.”

Silence from the furrowed brows.

“And students tell me at the end of the semester that they really enjoyed the project, including the volunteering,” I continued, ignoring the silent “oh, yeahs” wafting through the room like smoke.

I know what they’re thinking: I don’t have time for this. She wants us to do what? I don’t want to go talk to strangers, much less volunteer for them.

It amazes me that they stay in the class and persist with this nutty teacher who tells them that they will also do this as a persuasive piece of writing (the class centers around the idea of the argumentative essay) showing why this volunteer experience was important and/or fulfilling. Along the way I teach them interviewing skills (they practice on a family member and write essays about that, too), how to structure an argument (writing an opinions piece with good sources that might run in a publication), and they read a lot of creative nonfiction/reportage, which involves writing in scenes that puts a reader on the shoulder of the narrator.

I love watching them drop into their projects once they land on an idea, see their excitement when they begin to volunteer, watch them grow more confident when I give them feedback on the first pages of their papers, and listen to them encourage each other through their first full drafts.

This semester Selena volunteered for CAFFE, which I’d never heard of—Clothing and Food for Everyone—which donates, yes, clothing and food to homeless and hungry people in Sacramento. Brianna accompanied high school students at her church as they gave snacks and cocoa to homeless people in San Francisco’s Tenderloin. Luis distributed food to hungry students on our campus through the RISE program. Charlotte volunteered for Happy Tails, Daniel for Meals on Wheels, and Armando for Loaves and Fishes.

Uli went back to his high school and helped coach the football team he’d once played for, and Jose returned to his hometown and volunteered as a coach for his former soccer team. Fernanda, Erin and KashAni each went to different blood donation centers and gave out snacks to donors. Avnett spent time at her church preparing for a Sikh wedding. Terry, Juan and Perla served as volunteer tutors for high school students. Estefani helped kids with their catechism class at Holy Cross Parish.

Bryce and Kate worked hard on two different small farms, helping with chores and harvesting produce. Nora volunteered in the costume shop of the B Street Theatre. Naomi donated time to a Halloween event at her church, and Tracy worked in the kitchen making food at her church’s Asian cultural event.

Some of their projects touched me deeply: Alex and a friend put out the word for old blankets and towels and gathered a small truckload of them to donate to an animal shelter—the largest single donation the shelter ever had. Julio accompanied a hospice volunteer to see an older veteran, making a nice connection since Julio, too, is a veteran. Roseann got donations of magazines for a collage project at Maryhouse, a women’s day shelter in Sacramento. She continues to donate her time to lead art projects there. Blong volunteered for a mayoral campaign in Elk Grove that elected the state’s first Hmong mayor. Cristian cleaned the attic and cut the hair of an elderly neighbor who years ago taught Cristian how to tie his necktie for his senior prom. And Alyssa decided to share her room with a friend of a friend who needed a place to live for a month.

I often hear people, including my colleagues, bemoaning the skills and dedication of college students. “They’re just not good writers. They don’t read. They don’t improve.” I can say, unequivocally, that every one of my English 302 students this semester not only improved, but they also wrote their hearts out about their volunteer projects and what they learned from them. Most of all, they gave to others while discovering things about themselves.

“I know for sure that I want to be a nurse more than anything,” wrote Pang, who is a long-term volunteer at the UCD Medical Center.

“I’ve learned what it’s like to be old and lonely,” wrote Cuc, who called out bingo numbers and visited with residents at an assisted living center. “And it doesn’t take much to brighten someone’s day.”

Chris, an Iraq War veteran, did lots and lots of dishes at a VFW on a Sunday morning after the weekly fundraising breakfast. “I talked to vets of all ages, shapes and sizes,” he reported. “And I learned again what I already knew: We are more alike than we’re different.”

“I dug ditches for water lines in what will be the back yard of someone’s house today,” wrote Chelsea, who got her hands dirty for Habitat for Humanity.

And Hyejin, an international student from Korea, who learned to fear and despise homeless people in her native land, met dozens of them at the Union Gospel Mission. “I learned that they are people, too, no matter what people think of them,” she said.

I am so proud of my awesome students. I praised them mightily in class as they drafted their papers and the day they turned them in. I thanked them for volunteering so much of themselves and putting that on the page.

“That’s courageous,” I said. “Not everyone does what you’ve just done. And you got the added benefit of feeling good about your volunteer work because you did something for someone you didn’t know who didn’t expect your help. You were kind and caring, and that’s everything.”

This is my secret mission: to spread more kindness in the world to people we don’t know and whom we may never see again. And, while we’re at it, to spread that kindness around our immediate circles, too. Because, despite our differences, I want my students to know that we really are in this together, this great soup of humanity, and oh, how much better it is when we lend a hand, share a smile and give of ourselves to others.

9 Responses to My awesome students